Days Of Our Lives Spoilers: The Walls Close In On Claire Brady– Ben Searches For Her For Answers On Cabin Fire!

Days of Our Lives (DOOL) spoilers tease that Ben Weston (Robert Scott Wilson) will go on a desperate search for Claire Brady (Olivia Rose Keegan) in Wednesday’s episode. The viewers will recall that Ben and his girlfriend Ciara Brady (Victoria Konefal) were sitting having breakfast at the café where Claire works and was talking about the first cabin fire where Ciara was trapped.

Ben was talking about hearing “music” before they left to go to the café. He tried humming the tune to an amused Ciara, who promptly told him he was tone deaf and then suggested they go get some breakfast. They had been discussing what he remembered when Dr. Marlena Evans (Deidre Hall) had hypnotized him, at his request.

He had wanted to remember more details, since he knew that new Police Commissioner Eve Deveraux (Kassie DePaiva) had her eye on him to pin it on him as revenge for his killing, as the Necktie Killer, her daughter Paige Larson (True O’Brien).

While Claire was talking to her grandma Marlena earlier, distraught over her rejection and breakup with Tripp Dalton (Lucas Adams), she nearly confessed the fire to her, but then was interrupted by a call from Tripp, making excuses for not coming home to the loft the night before.

In reality, he had been stuck overnight with Haley Chen (Thia Megia) and JJ Deveraux (Casey Moss) at the Horton Cabin after missing the ferry boat and called Claire to cover his shift at the café. Marlena could tell something was up, but couldn’t get Claire to tell her the truth about what she had almost confessed to her. Claire then rushed over to the café to cover Tripp’s shift for him.

While she was there, she overheard Ben and Ciara talking about the fire, and heard her name mentioned and panicked! She left Eve a voicemail telling her she had to arrest Ben today before he could finger her for the fire, which she had confessed to Eve a couple of months back!

While she took Ben and Ciara’s order, Eve called her back and Ben heard her cell phone and Days of Our Lives viewers could tell he recognized the ringtone as the “music” he heard at the cabin!

Undoubtedly, he will tell Ciara about it after Claire leaves after taking their breakfast order, but Claire might keep an eye and an ear on them. When she realizes Ben knows he heard her phone that night, she will undoubtedly panic even worse, and probably take off right then and there without finishing her shift; when Ben and possibly Ciara with him look for her later, they won’t find her where she should be and possibly not be able to reach her by phone either. 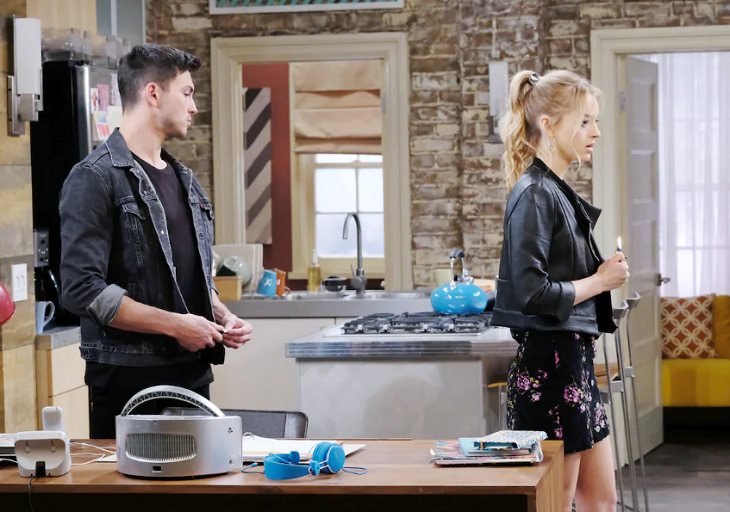 Ben will make a desperate search for Claire, knowing she’s gone off the rails and having deduced that at first, Tripp will be in mortal danger after recalling the pile of clothes in the floor and her ready to light them that he walked in on a couple of days earlier!

He may not know that JJ and Haley ran off and that Tripp is at the Horton cabin, but how he knows where to look should play out in Tuesday’s episode also.