On General Hospital, Valentin Cassadine (James Patrick Stuart) has done everything to keep Nina Reeves (Michelle Stafford) by his side. That includes recruiting Sasha Gilmore (Sofia Mattsson) to pretend to be Nina’s daughter. He has created a web of lies that it is hard to imagine how he can worm his way out. Stuart shares what he thinks Valentin would do to save himself.

Stuard told Soaps In Depth that the moment he read the script about Valentin getting Sasha to be Nina’s daughter, he felt it was awful. “I don’t see how anybody can be redeemed from this… but it’s good drama!”

The truth is bound to come out at some point, so the question is, can Valentin get away with it?

GH spoilers– Will Valentin Get Away With The Sasha Scam

“My feeling is, he can always throw Curtis under the bus,” Stuart said. “Curtis is the guy who did the dirty work. And I just can’t understand how Valentin has always been okay with Nina being dear friends with such a beautiful man!” 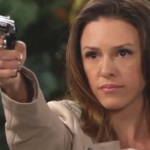 “I am sure Valentin is just waiting for his moment to hurt Curtis as badly as he can, so yes, Curtis should be his escape hatch.”

Or maybe their love for each other can overcome whatever lies Valentin told Nina?

“She’s definitely been brought down to a level of crazy,” he continued, pertaining to how Nina has acted as a mean girl amid Charlotte’s school trouble.

Jax hasn't been back in Port Charles long, but he's already making some big, competitive moves around town.
Tune into an exciting #GH – STARTING NOW on ABC! @IngoRademacher pic.twitter.com/pV8qaQrUMw

“I don’t know if it matches Valentin’s level of insidious insensitivity, but they’re not so far apart anymore. They’re both nuts. Perhaps this [relationship] is sick and twisted… and yet it works for them? And even if he delivers someone who isn’t legitimately her daughter, their love somehow can transcend that.”

For now, though, “General Hospital” spoilers reveal immediate trouble coming in between Valentin and Nina. As Jasper “Jax” Jacks (Ingo Rademacher) is keeping Nina busy with the magazine, Nina decides to postpone their marriage and tells Valentin that September would be a better time. Valentin sees Jax as a thorn on his side, so he might just do something to get him out of the way.

Days Of Our Lives Spoilers: The Walls Close In On Claire Brady– Ben Searches For Her For Answers On Cabin Fire!

General Hospital Spoilers: Peter Isn’t Sure Finding Dante Is A Good Idea– Is That What He Cautions Lulu About?