Days Of Our Lives Spoilers: Ted Disappears– Is Kristen DiMera Behind It? 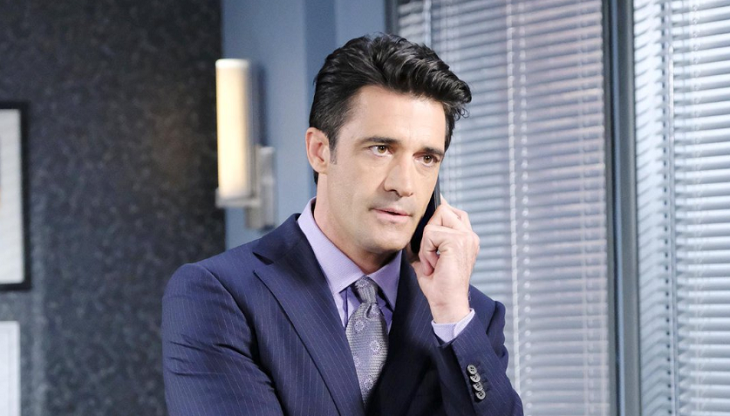 Days of Our Lives (DOOL) spoilers tease that Ted Laurent (Gilles Marini) will mysteriously vanish this summer. Could it be Kristen DiMera (Stacy Haiduk) that makes him disappear?

Days of Our Lives viewers will recall that Ted was never on board with the fake kidnapping and death of little Holly Jonas (Scarlett and Harlow Mallory) and may feel so sorry for her mom Nicole Walker (Adrienne Zucker) that he will tell her the truth and that he knows Holly is alive, and the wreck was a setup with cadavers, but that he doesn’t know where she is.

Of course, neither does Ted know when he talks to Nicole that he’s really talking to Kristen, Xander Kiriakis’ (Paul Telfer) other partner that Ted doesn’t know about but heard him talking on the phone too in episodes around a month back on Days of Our Lives.

Kristen may decide Ted knows too much and has too big of a mouth and could expose other, more important secrets that Kristen doesn’t want coming out, and decide to get rid of the problem of Ted once and for all!

Of course, if she asks Xander to do her dirty work then Ted could always wind up on Xander’s Greek Island safe and sound, but isolated and with no way to reach out to anyone who could help him in Salem. This is what happened to him before when he was banished to an island somewhere by Stefan DiMera (then Tyler Christopher) and Ted always spoke of the island as belonging to Stefan, although it could have been Xander’s island as well.

But since this is Kriste  DiMera Days of Our Lives viewers and Ted are dealing with, will he just be kidnapped again, or will she eliminate him entirely? Hope Brady, (Kristian Alfonso) who is now officially dating Ted, giving him the benefit of the doubt that he has reformed, may feel helpless when she realizes he’s gone missing, with no access to law enforcement networks or databases, although she could reach out to John Black (Drake Hogestyn) for help.

Hope’s not going to trust anything Eve Deveraux (Kassie DePaiva) could or would do, although she too, as well as Jack Deveraux (Matthew Ashford) are bound to notice they’re missing a DA!

Stay tuned to Days of Our Lives and keep checking Days of Our Lives spoilers frequently for all the latest news, updates and developments! As always, more detailed Spoilers and Breaking news will appear here on Soap Opera Spy!

General Hospital Spoilers: Kevin Returns To Work And Takes On New Patients — Will One Of Them Be Nelle?

General Hospital Spoilers: Cameron Comforts Josslyn As She Grieves For Oscar– Is It Leading Up To Joss-Cam Romance?