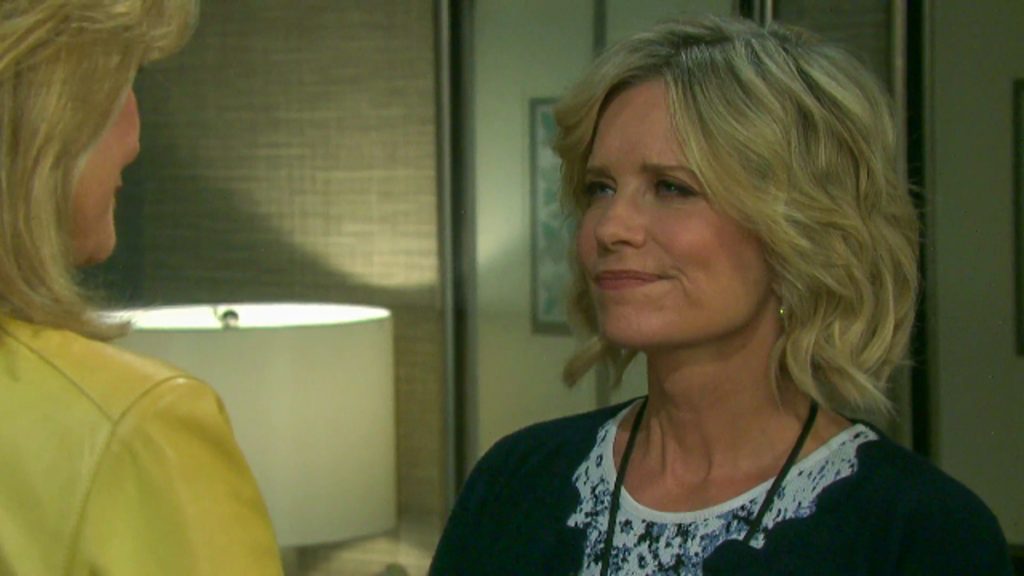 Days of Our Lives spoilers reveal the new Stefano DiMera (Stephen Nichols) and Kate Roberts DiMera (Lauren Koslow) will find themselves in the bedroom. Not only will things get steamy between the sheets, but Kate uses this opportunity to get underneath Kayla Brady’s (Mary Beth Evans) skin. That means soon, Kayla is going to find out her husband is back, but thinks he is someone else.

Days of Our Lives Spoilers – Kate Roberts DiMera Knew All Along

Days of Our Lives spoilers tease that Kate knew Stefano was back long before we did. At first, she didn’t believe it because she was looking at Steve “Patch” Johnson’s (Stephen Nichols) face. However, the DiMera patriarch was able to prove that it was really him. He told Kate things that only he would know. But what made Kate realize that it really was Stefano was due to not what he said, but what he did.

Back when Stefano and Kate were married, the marriage ruse turned into love. There was one spot on her neck that drove her wild when Stefano kissed it. In order to prove to her that he was the real Stefano, he kissed her in this same spot. That sealed the deal for Kate and she has been hiding this huge secret all this time.

Days of Our Lives spoilers reveal the rest of Salem will soon discover that Stefano is alive, but with someone else’s face. We don’t know all the details yet, but a time jump promo released last month showed Santa at the hospital. Then, Kayla was seen chasing after the man calling the name she knew him by… Steve.

It is teased that after Kayla sees Steve, she will be shocked to learn that the real reason he signed the divorce papers so quickly. Because it wasn’t Steve that signed them, but Stefano. Of course, fans know that it is actually Steve. Despite Stefano’s belief that he has Steve’s body and face, it is actually the other way around. It is Dr. Rolf’s (William Utay) brain chip that is causing Steve to think he is Stefano.

Not only does she have that shocker to deal with, but Kayla finds out that Stefano and Kate are a couple. Kate will use this to get underneath Kayla’s skin and it works. Now how will Kayla get back the real Steve? And will she return to him after he’s back to himself, or is her future with Justin Kiriakis (Wally Kurth)?