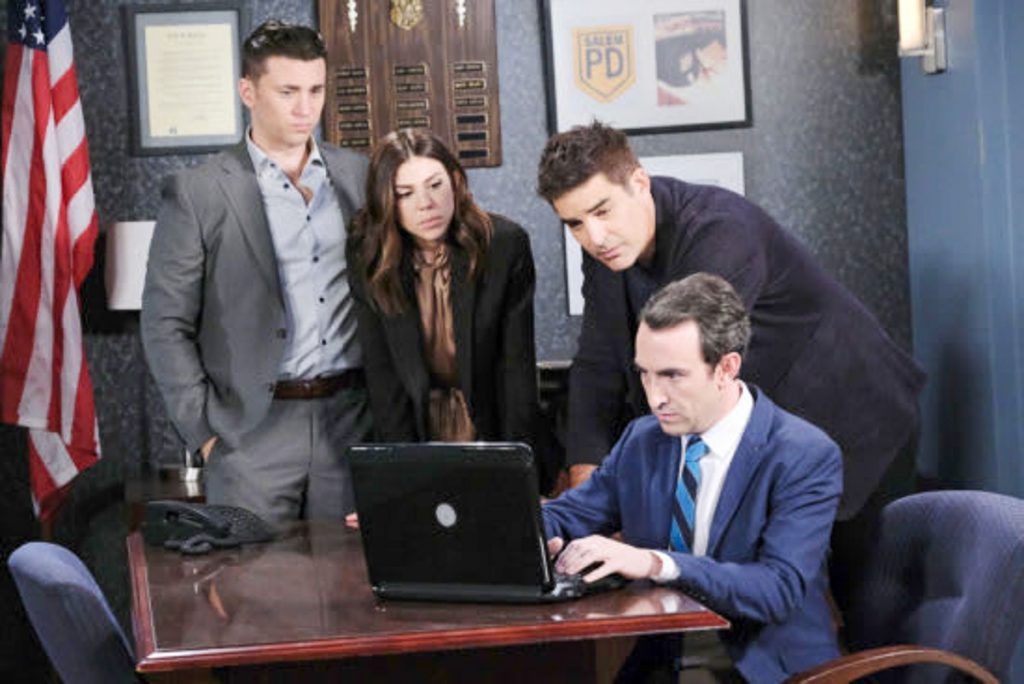 Chad DiMera (Billy Flynn) helps Abigail DiMera investigate her mother’s case to see if they can find anything the police missed in the investigation of Jennifer Deveraux’s (Melissa Reeves) tumble over the balcony railing of “The Bistro”.

Days of Our Lives viewers will recall from Thursday’s episode that Chad told Abigail that one of DiMera’s companies is a tech company that recently developed an artificial intelligence program, and that he thought that a tech he knew there could prove whether the surveillance tape showing Eve Donovan (Kassie DePaiva) at the scene of the crime was doctored or not. Today there will be a continuation of that scene with more in-depth discussion and perhaps Chad taking the surveillance tape to him.

Days of Our Lives Spoilers And Recap Wednesday, December 11 – Ben Has A New Lawyer; Mickey Has Cancer

Feeling the pressure, “Hope Brady” makes plans to flee Salem as more and more Salemites seem to be growing suspicious of her behavior. Of course, Days of Our Lives viewers know that she was implanted with a device over a year ago by Dr. Wilhelm Rolf (William Utay) that apparently reactivated the control chip in her brain implanted years ago by Stefano DiMera (then played by Joe Mascolo) that turned her into Princess Gina Von Amberg (Kristian Alfonso).

The last thing that she wants or needs is for Abigail to figure out that she was the one who pushed Jennifer over the balcony railing of The Bistro, or for Jennifer to remember she told her she was Princess Gina right before she pushed her!

Meanwhile, Xander Kiriakis (Paul Telfer) becomes suspicious of Ciara Brady (Victoria Konefal), perhaps when he realizes the neither the key nor the combination to his metal briefcase work anymore, and recalls seeing her in his office several times when she had no reason to be there!

Since he is stuck in Salem while Eric Brady (Greg Vaughan) and Sarah Horton (Linsey Godfrey) are taking the baby he has come to think of his own, Mackenzie “Mickey” Horton (the May twins) to Boston for cancer treatment, he may as well make himself busy. He will deduce, correctly, that Ciara has been up to something but what could she have been looking for that would have been in his metal briefcase; and did she take anything? It would be rather difficult to see if anything is missing unless he’s able to get it open!

Jack Deveraux (Matthew Ashford) is finally able to bring Jennifer home from the hospital after a year and a few weeks, and Jennifer couldn’t be happier to be home! He carries her over the threshold and finally they get to have a honeymoon of sorts and share a little romance!

Days Of Our Lives Spoilers: Phillip Kiriakis Arrives! Last Blast Reunion About To Become A Nightmare?