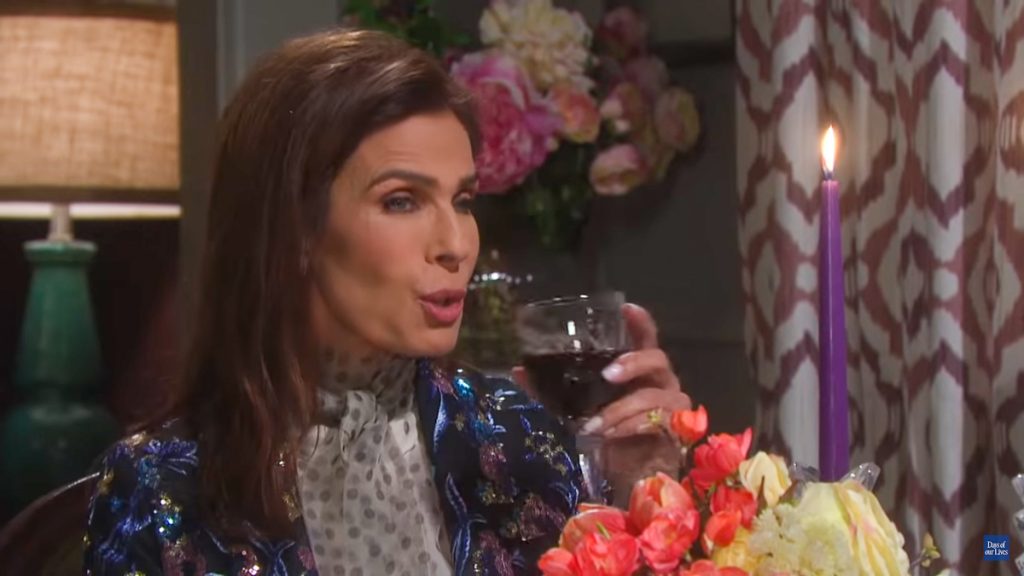 Days of Our Lives spoilers reveal Chad DiMera (Billy Flynn) thinks his father is back. He could be right, but it’s not what fans think. Plus, Princess Gina (Kristian Alfonso) talks to “Steffy,” her nickname for Stefano DiMera (formerly Joseph Mascolo). Is Dr. Rolf (William Utay) involved in another sinister scheme?

DOOL spoilers confirm that Chad makes a huge confession to his wife. He tells Abigail DiMera (Kate Mansi) that he has been in contact with Stefano. Later, he will confide in his spouse about his certainty that Stefano is back in town.

In the extended promo for the time jump, Princess Gina talks to a man she calls “Steffy.” As long-time viewers know, this is what she called Stefano. The man’s face is never shown, but we do see a chess board, a man’s hand holding a cigar and a ring. These are all clues that she could be talking to Stefano — or someone that believes they are the DiMera patriarch.

Joseph Mascolo portrayed Stefano DiMera for decades on the NBC soap opera. He was a legendary character and fans expressed their wishes that he not be recast. It was stated by the show bosses that they would honor Mascolo’s memory and had no intention of giving the role to someone else.

However, they have kept Stefano alive in other ways. By making him vanish in Europe, despite several Salemites going on the hunt for the villain. He has been mentioned several times and characters that were associated with Stefano have shown up. Days of Our Lives spoilers indicate that a few examples are Dr. Rolf and Princess Gina.

It is speculated that Stefano will not actually return. However, he will show up in alternative ways. Dr. Rolf transformed Hope Brady into Princess Gina. So, he has the ability to brainwash and implant memories into people. Could he want Stefano’s return so bad that he would turn an innocent Salemite into Stefano?

It seems like the most likely scenario, especially since it is hinted to expect storylines that nod to classic DOOL plots. Plus, Dr. Rolf had a specific reason to “rebirth” Princess Gina. He said he had grand plans for her. Just how far will he go and how will Salem be impacted by the mad scientist’s scheme?