On July 20th, a fan tweeted to Robin wanting to know if she had any more information about when she would be appearing on Days of Our Lives and for how long; Robin replied, “#DOOL “See you in September”:)
Seriously, to the best of

my knowledge, it’s going to be a September start-Just 15 episodes-but an honor to have be asked to do this iconic show!” The fifteen episodes may or may not be in a continuous block, but from Robin’s tweet we can gather that they will start in September. 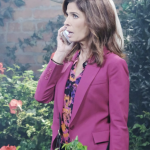 There was a rumor in November 2017 that she had been asked to play a part but that was later debunked as a rumor; however she reported in February 2018 that the Days Of Our Lives powers that be did indeed invite her to come over to Salem! An early leak came out when another Days of Our Lives actor had inadvertently caught a picture of Robin with her two dogs on the Days of Our Lives set but it was never confirmed to be her!

DOOL Spoiler – Who Will Robin Strasser Play On Days Of Our Lives?

It looks like Robin will be playing the role of Vivian Alamain, formerly played by her friend Louise Sorel, who declined to reprise her role as the mother of Stefan DiMera (Brandon Barash). The character of Vivian was last seen May 23, 2018 when she was given a mysterious injection in the neck and then later Kate DiMera (Lauren Koslow) had a flashback to shooting Vivian in cold blood, presumably having killed her but Vivian came to in a dark, dingy room. In October 2018 the intials “VA” were shown on a door in the warehouse-type facility used by Kristen DiMera (Stacy Haiduk) and Dr. Wilhelm Rolf (William Utay) for experiments, including memory serums and resurrection serums.

Robin will have some reunions with old friends who also work at Days of Our Lives now, one being writer Ron Carlivati who once wrote for the defunct ABC soap “One Life To Live” where Robin played Dorian Cramer from 1979 to 1987 and 1993 to 2011 when it was cancelled, then again during the brief internet revival of the series by a company called Prospect Park, from April to September 2013. Kassie DePaiva who now plays Eve Deveraux on Days of Our Lives played Blair Cramer, who was the niece of Dorian Cramer, the character that Robin played on “One Live To Live”.

Robin also played Iris Osacek in “The Secret Storm”, Rachel Cory Hutchins in both “Somerset” and “Another World”, Dr. Christina Karras in “All My Children”, as well as Hecuba on “Passions”. However, Robin is probably best known as Dorian Cramer Lord on “One Life To Live”. She also had a recurring role as Dianne Kirkwood in the primetime soap “Knots Landing”.

Days Of Our Lives, All My Children Spoilers: The Soap World Mourns Actor John…