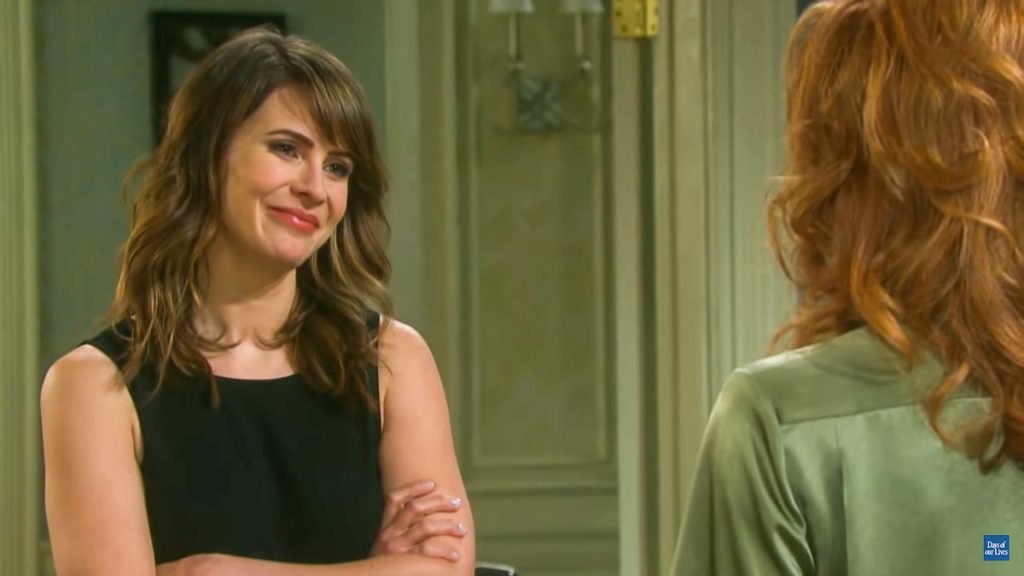 Days of Our Lives spoilers tease another exciting episode for Monday, November 11th for Days of Our Lives fans! Remember, the Salemites have jumped one year ahead in time, and some scenes will be one year from now in Salem time, but fans will be caught up through flashbacks!

Jennifer Horton Deveraux (Melissa Reeves) is reunited with her daughter and son, Abigail Deveraux DiMera (Kate Mansi) and JJ Deveraux (Casey Moss). Tuesday’s spoilers indicate that Jennifer has come out of her coma, which was caused by Princess Gina (Kristian Alfonso) pushing her off the balcony of The Bistro. However, the wrong person will have been put in prison for the crime, based on Jack Deveraux’s (Matthew Ashford) and others’ testimony. The arrest will likely be shown in flashbacks or could be in mentions only.

Sarah Horton’s (Linsey Godfrey) baby drama will take a surprising turn; remember, this is one year ahead in time so she has already had the baby. Apparently she has decided to stay in Salem, or perhaps left and returned in that time. She cannot keep the baby a secret so a decision must have been made to either name Rex Brady (Kyle Lowder) as the father, or Xander Kiriakis (Paul Telfer) as the father since other spoilers for Wednesday’s Days of Our Lives episode indicate that Nicole Walker (Arianne Zucker) and Sarah will share their guilt over their deception, which has to be keeping the truth from Eric Brady (Greg Vaughan) being the baby’s father. However, “the truth will out” as the saying goes; will Eric find out the truth?

Ben Weston (Robert Scott Wilson) will share his woes with an unexpected confidant in Monday’s episode. Remember, Days of Our Lives has skipped one year ahead, so Ben may be in prison because of the dead body he found in Friday’s episode. The time jump spoilers said there would be at least two Salemites in prison after the jump; we can probably assume if Ben is one, then the unexpected confidant is one of the others! Viewers will have to tune in to the show to see exactly who it is that Ben confides in! It will probably be someone quite unexpected! Some Days of Our Lives spoilers tease it could be Will Horton (Chandler Massey)!

Days Of Our Lives POLL: Who Will Be In Jail In The One Year Time Jump? @celebratesoaps https://t.co/Sn37XTNF97 #days #dool #daysofourlives

An unexpected death will be revealed that happened during the one year that has been skipped, and details will likely be shown in flashbacks. Other Days of Our Lives spoilers teased that it may be Adrienne Kiriakis (Judi Evans) who died very unexpectedly during the year. We can be fairly certain it won’t be any of the seniors in Salem, such as Victor Kiriakis (John Aniston), Doug Williams (Bill Hayes), Julie Williams (Susan Seaforth Hayes) or Maggie Kiriakis (Suzanne Rogers) and probably not Dr. Wilhelm Rolf (William Utay) since Hope Brady (Kristian Alfonso) is still Princess Gina. Chad DiMera (Billy Flynn) will reveal to Abigail later in the week that he has heard from Stefano DiMera (Joseph Mascolo) so it won’t be him either even though the actor passed away nearly three years ago!

Days Of Our Lives Spoilers: Will Hope Leave Salem To Find Ciara? Vincent Reveals Her…