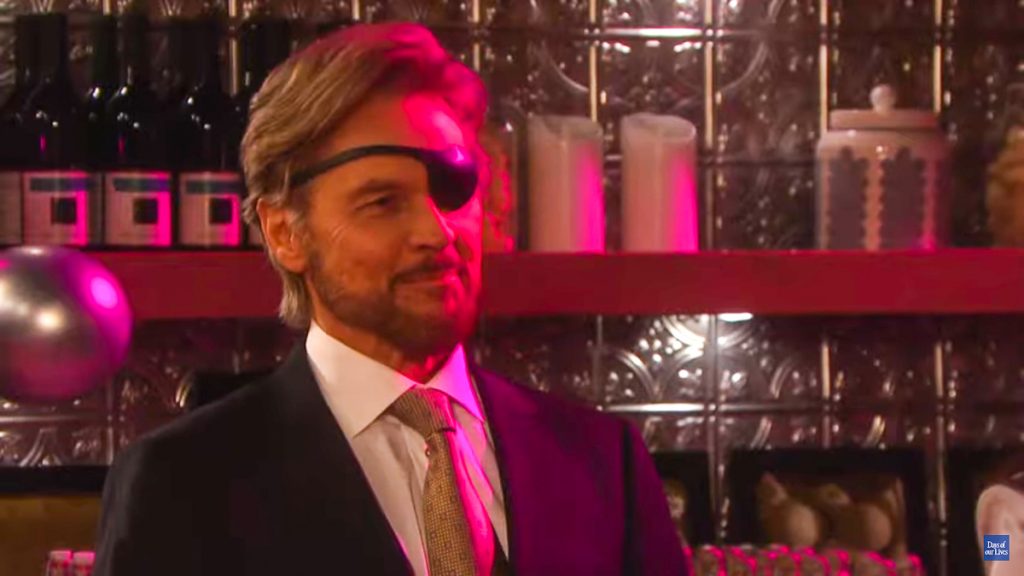 Dr. Marlena Evans (Deidre Hall) confronts “Hope Brady” (Kristian Alfonso) about her feelings for John Black (Drake Hogestyn). Even though “Hope”, who as Days of Our Lives viewers know, has been programmed to be “Princess Gina Von Amberg” for over a year now has moved out of John and Marlena’s home, Marlena still feels like she needs to be confronted about her feelings for John. Marlena knows it is not like Hope to allow herself to have romantic feelings and attractions to a married man, and especially not the husband of a friend!

Kate Roberts (Lauren Koslow) threatens to expose Stefano DiMera (Stephen Nichols) in Monday’s episode. Stefano has been increasingly getting on Kate’s nerves as she has been having to hide him in her room over Brady’s Pub, and with Marlena’s doppelganger, Hattie Adams (Deidre Hall) coming to work at the pub and staying in another room over the Pub, Stefano’s staying a secret is getting increasingly difficult.

She may remind him that the gatehouse on the DiMera mansion property is vacant since Ben Weston (Robert Scott Wilson) is in prison, although he will likely turn that idea down flat! At that point she might suggest the wine cellar and going in and out through the tunnels if he wants to keep himself a secret so bad, because she’s to the point where she won’t!

Meanwhile, Gabi DiMera (Camila Banus) is shocked to discover someone has vandalized her Gabi Chic Store in Horton Town Square! The entire front store window is shattered and broken out, although she will likely be relieved to know nothing inside was stolen and no cash registers or safes were broken into.

She will likely tell her boyfriend, Eli Grant (Lamon Archey) first, probably suspecting Chad DiMera (Billy Flynn) is behind it since they are in a battle for DiMera Enterprises. Eli will likely suggest that they notify the Salem police as well, and she may talk to her brother, Detective Rafe Hernandez (Galen Gering) about the vandalism.

Days of Our Lives Spoilers: December 16 – 20: Lani And Kristen's Exposive Plot – Will Asks Sonny For A Divorce – Stefano’s Secret To Be Exposed https://t.co/mfDb0yie07

Kristen DiMera (Stacy Haiduk) will be enraged when she spies Brady Black (Eric Martsolf) and Nicole Walker (Arianne Zucker) kissing! First she will go and vent to her friend, Lani Price (Sal Stowers) who will talk Kristen down before she immediately goes ballistic on the couple!

After all, the last time she went ballistic about something, Haley Chen (Thia Megia) got in the way and was killed! Lani won’t want Kristen to kill anyone, and she wouldn’t have postpartum depression and the death of a baby to blame it on this time!

‘The Bold and the Beautiful’ Spoilers: Brooke Isn’t Ready To Forgive Thomas — Can Bridge Survive?