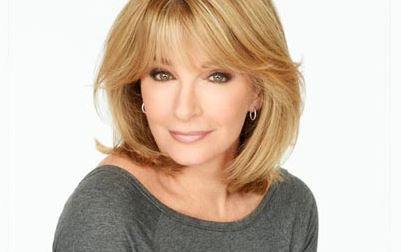 Hattie Adams, (Deidre Hall) after convincing Roman Brady (Josh Taylor) to tell her where Kate Roberts’ (Lauren Koslow) room is, is thrown for a loop when she finds out who’s in it – it looks like Steve “Patch” Johnson (Stephen Nichols) – minus the patch! Longtime Days Of Our Lives viewers will recall that Hattie came to look like Dr. Marlena Evans’ (Deidre Hall) doppelganger thanks to none other than Stefano DiMera (then played by the late Joseph Mascolo).

He will undoubtedly have to bring Hattie up to date as to why he is now residing in the body of a man who he hates, but it was better than the alternative since Dr. Wilhelm Rolf (William Utay) couldn’t come up with a youth serum that would also cure cancer, diabetes, and numerous other health issues!

Lani Price (Sal Stowers) and Kristen DiMera (Stacy Haiduk) return to Salem, after deciding against going through their vows of chastity to become nuns in a convent in Rome. As Days of Our Lives viewers will recall, they decided to come back to Salem and each fight for what is theirs, in Lani’s case, Eli Grant (Lamon Archey) and to take down Gabi Hernandez DiMera (Camila Banus), and in Kristen’s case, Brady Black (Eric Martsolf) and she also has an interest in taking down Gabi since she wants to get back in control at DiMera. However, she will have half-brother by adoption Chad DiMera (Billy Flynn) as well as Stefano in town, who will either back her or fight against her; but they all want to take down Gabi, so there’s that!

Lani indirectly strikes back at Gabi – by disguising herself in her nun’s habit, which she evidently brought back with her as a souvenir – or maybe as a disguise – and throwing a rock through the front window of the Gabi Chic store in Horton Town Square! Promo stills for the episode show who appears to be Lani in her nun’s habit staring at her handiwork after the entire window has shattered and fallen away! Kristen must be proud of her for doing something to take out her anger on Gabi, and hitting her in the pocketbook might do the trick if her insurance doesn’t cover vandalism! A well-placed target on the forehead of each mannequin might leave a not-so-subtle message but she doesn’t want to get caught on any security footage!

Nicole Walker (Arianne Walker) might just be in the Christmas spirit, or she might be in the rebound spirit as she impulsively pulls Brady Black into a kiss! Nicole had better be careful – for one thing, Brady is a serial rebounder and she’s got competition in the form of Kristen who has just returned to town! Kristen doesn’t play well with others and she doesn’t share where her men are concerned! However, a little jealousy might do Eric Brady (Greg Vaughan) good if it gets back to him since he always seems to want who he can’t have!