Days Of Our Lives Spoilers: Rafe Tries To Break Up A Fight Between Hope and Kate 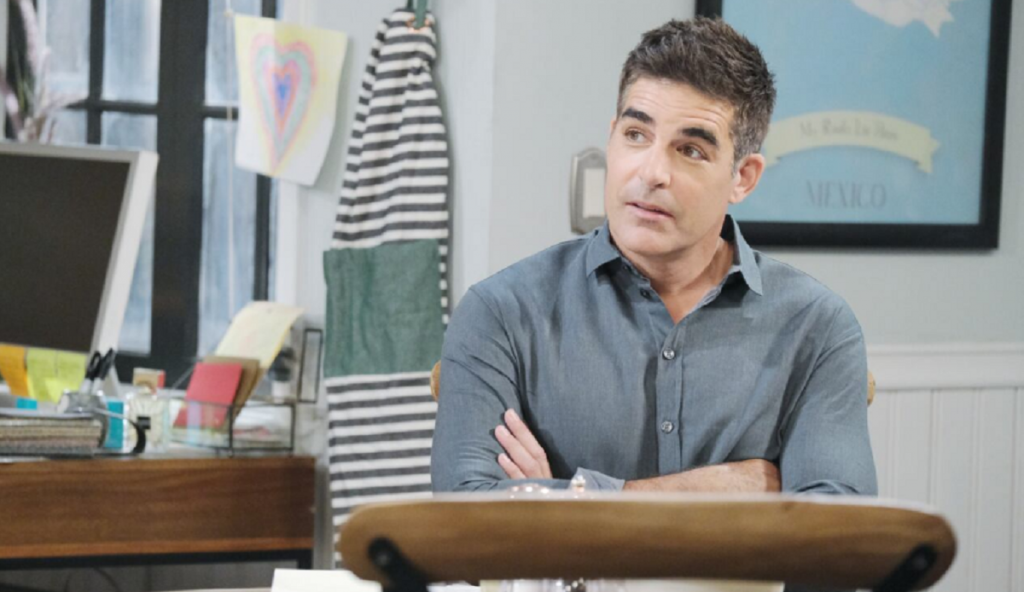 Days of Our Lives (DOOL) spoilers tease that Detective Rafe Hernandez (Galen Gering) will find himself having to break up a fight between his ex-wife (or so he thinks) Commissioner Hope Brady (Kristian Alfonso) aka Princess Gina Von Amberg and Kate Roberts (Lauren Koslow) in an upcoming episode of the NBC soap opera.

Loyal viewers may have noticed that this new and improved version of Stefano DiMera, or should that be Steveano DiMera (Stephen Nichols) seems to be a player! He pines for his “dark queen” Dr. Marlena Evans (Deidre Hall) but at the same time, has been fooling around with his “Katerina”, otherwise known as Kate! Roman Brady (Josh Taylor) recently found Kate was hiding someone in her room, and that someone would be Stefano! On the other hand, “Hope” has recently been rejected romantically by John Black (Drake Hogestyn) and her hopes and dreams for a future with him were dashed, and she was devastated.

However, she has been rather “handy” with Stefano, petting his arm, letting him know how attractive he is in Steve Johnson’s body, and even gave him a smack on the rump in a recent episode! Kate has no qualms about being involved with him, knowing he is her Stefano although in a different body, but probably not knowing that his true obsession is with Marlena. It’s a good bet that the two women may be fighting over him!

Stefano definitely has had the life of a lover, with six wives, six romances, and nine birth children, some with wives and some with lovers! He has two adopted children, Kristen DiMera (Stacy Haiduk) and her brother, Peter Blake (Jason Brooks). His youngest child, Stefan O. DiMera (Brandon Barash) with Vivian Alamain (Robin Strasser) unfortunately died before “Steveano” came to Salem and so father and son never met each other.

So it is not surprising that he would be pining for one woman and fooling around with another, and maybe having a third rebounding onto him! Stefano first was involved with the original Princess Gina, who was an art forger, thief, and minion of Stefano, and she in turn became involved with John when he was “The Pawn” and also under Stefano’s control.

The original Princess Gina came under a deep depression when Stefano took John away from her in 1985 and locked her in a castle turret at her home outside Paris. Stefano then developed a computer chip with Gina’s “essence” which he had implanted in Hope’s brain, and was able to control via satellite. It was apparently this control chip that Dr. Wilhelm Rolf (William Utay) implanted an upgrade of some sort into Hope’s neck and reactivated the chip.

Rafe is in a bit of a pickle as far as any arrest action towards Hope since she technically is his boss, but when he breaks up this fight between her and Kate, there may be just cause to arrest her or maybe both of them if the fight is physical and not just a loud argument!

He knows there is something very off with her although so far neither he or anyone else among her friends and family in Salem have been able to put their finger on exactly what it is. Perhaps this will give him a chance to study her a little closer and someone who knew Hope when she was under Stefano’s control before can help him figure it out!

Stay tuned to DOOL and keep checking Days of Our Lives spoilers frequently for all the latest news, updates and developments!

The Young and The Restless Spoilers: Chase Coleman Lands Short-Term Role On Y&R