Days of Our Lives (DOOL) spoilers for the week of Monday, August 19 through Friday, August 23, 2019 reveal step-brothers Brady Black (Eric Martsolf) and Eric Brady (Greg Vaughan) may end up in another argument over yet another woman as Brady finally confesses to Eric that he is going to give it a shot with Nicole Walker (Arianne Zucker); and they are once again a couple, despite Brady’s reservations on why he can’t get Kristen DiMera (Stacy Haiduk) off his mind.

DOOL sources tease that Will Horton (Chandler Massey) may have the key to blowing Brady’s suspicions wide open when he implies that Kristen DiMera may, in fact, still be alive. Will this cause Brady to question the mysterious scarring on Nicole’s back?

Gabi Hernandez (Camila Banus) has never hidden her disdain for enemy; but it seems this week, the two will finally give in to their true feelings for each other. Does this mean the new DiMera power couple will reunite and work together to save his father, Stefano DiMera’s (the late- Joseph Mascolo) family company and legacy DiMera Enterprises? 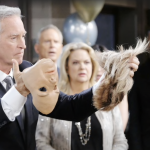 Days of Our Lives spoilers show that Roman Brady (Josh Taylor) was not impressed with the position Anna DiMera (Leanna Hunley) put him in, making it seem that she was totally in love with him and completely over her “returned from the dead husband”, Tony DiMera (Thaao Penghlis). Ultimately Roman reluctantly agrees to follow through with Anna’s plans when she announced that she is going to marry him. Will these two make their way to the altar and actually get married?

Days of Our Lives Spoilers – A Startling Secret Reveals

John Black (Drake Hogestyn) and Dr. Marlena Evans (Deidre Hall) both planned surprised parties at Chloe Lane (Nadia Bjorlin) and Julie Olson Williams’ (Susan Seaforth Hayes) restaurant/club; without the either one knowing. The anniversary party will be in full swing, and like most parties that happen in Salem, something goes awry and a startling secret awaits all the guests in attendance.

By week’s end, Marlena appears to be in dire straits when Kristen DiMera appears and pulls a gun on the good doctor. Will anyone be able to save Marlena and her loved ones from all the destruction Kristen has dealt to all her loved ones?

Be sure to tune into NBC’s Days of Our Lives (DOOL) on Monday, August 19, 2019 to catch up on all these exciting stories unfolding in Salem right now. Check Soap Opera Spy often for updates, news, rumors and spoilers!