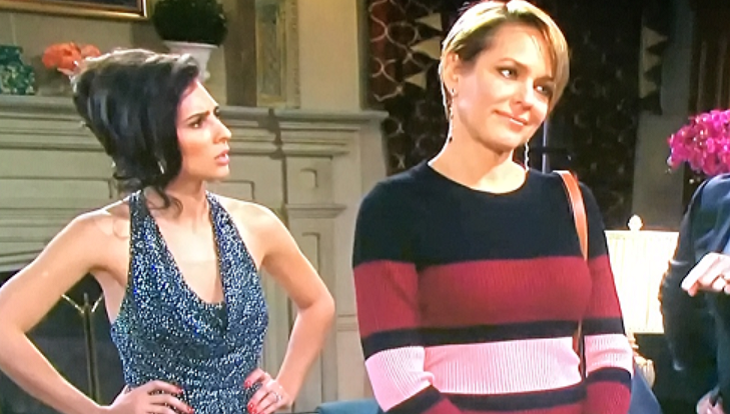 Days of Our Lives spoilers tease that Kristen DiMera (Stacy Haiduk) refuses to give up. Still determined to have control over DiMera Enterprises, she has a major showdown with Gabi Hernandez (Camila Banus). Keep reading to find out everything we know!

Kristen has been walking around Salem disguised as Nicole Walker (Arianne Zucker). It is a storyline that has been playing out for a few months now.

So far, only a few people know her true identity. It is only a matter of time before everyone finds out the truth. However, not until Kristen is ready for it to happen. In the meantime, she is determined to be the CEO of DiMera Enterprises.

Kristen isn’t the only one who wants to be in charge. Gabi was also pursuing the CEO position. Fans saw last week that things got heated between Gabi and fake Nicole. It got to the point where both women married a DiMera in order to get the job.

This is because the company is set up with the regulation that the CEO either has to be a DiMera by blood or marriage. As fans saw last week, Kristen/Nicole married Tony (Thaao Penghlis) while Gabi wed Stefan DiMera (Brandon Barash).

It was a tough decision for Mr. Wei Shin (Michael Hagiwara). At the end of the day, he chose Gabi Hernandez. This put Kristen in a rage and she even thought about killing her competition.

It turns out that things are over just yet. Days of Our Lives spoilers reveal that there will be another major showdown between Kristen/Nicole and Gabi during the week of August 12.

Days of Our Lives Spoilers: Kate Wants to Meet with Kristen DiMera, Will She Back Out of Deal? https://t.co/JdXkaVRqH8 pic.twitter.com/9lHj0tXq1C

Does Kristen plan on killing Gabi in order to get what she wants? Can Gabi survive making an enemy out of the fake Nicole? Fans will have to keep watching to find out.