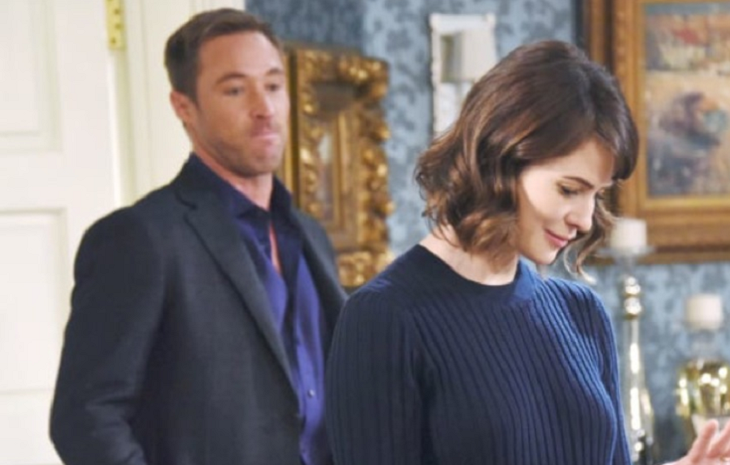 Days of Our Lives spoilers reveal before leaving Salem, Rex Brady (Kyle Lowder) will get revenge. His target is the woman he loved: Sarah Horton. During a recent interview, actress Linsey Godfrey explained the storyline and how Nicole Walker (Arianne Zucker) is involved.

Last week on the NBC soap opera, Sarah accidentally said to Rex, “I love you too, Eric.” Understandably, this caused a strong reaction from Sarah’s husband. As previously reported, a chat with Maggie (Suzanne Rogers) will prompt Sarah to tell Eric her true feelings.

However, don’t expect smooth sailing for Eric and Sarah. Rex already confronted Eric and the two got into a physical fight, with the jilted lover throwing a solid punch. After Eric and Sarah sleep together, Rex will have another confrontation, this time with both of them.

In the latest issue of Soap Opera Digest, Godfrey discussed what happens after the final confrontation. Rex twists a knife in Sarah’s head and tells his wife that she can’t compare to Nicole.

Eric’s heart will always pine for Holly’s mother. This creates insecurity and doubt in Sarah’s mind, which is exactly what Rex wants. If he can’t be happy, then he doesn’t want Sarah being happy either.

Days of Our Lives spoilers suggest that Rex’s statement will set up problems for Eric and Sarah. Instead of just focusing on being happy together, Sarah could have doubts and will compare herself to Nicole.

Days of Our Lives Spoilers – Will Her New Relationship End In Heartbreak?

This probably wouldn’t a big issue if Nicole were still dead (and she might really still be dead.) However, Kristen DiMera (Stacy Haiduk) is wearing a Nicole mask and everyone, including Eric, believes the facade.

Days of Our Lives Spoilers: Should Rafe and Hope Reunite After Ted’s Death? https://t.co/BQwTX2170I pic.twitter.com/nxBTeYIz20

Due to Sarah thinking that Nicole is really alive and back in Salem, she could create her own heartbreak by trying to compare her love with “Ericole.”