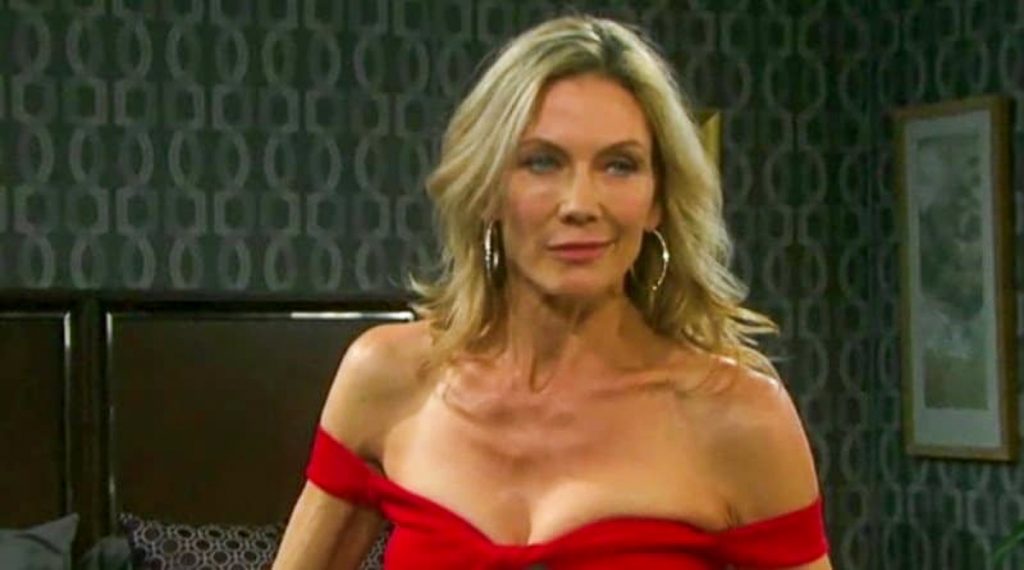 Days of Our Lives spoilers indicate that Kristen DiMera (Stacy Haiduk) won’t be in Salem after the time jump. The last time we saw the villainous vixen, she was carrying Brady Black’s (Eric Martsolf) child. So, where is she and why did she leave town? What does this mean for Brady and baby “Bristen?”

On Friday’s episode, Kristen got Eric Brady (Greg Vaughan) alone and exposed Sarah Horton’s (Linsey Godfrey) secret. As he rushed off the confront Sarah before she left town, Brady had his own accusations for Kristen. He assumed the whole pregnancy reveal was a lie, although she insisted that she was being honest.

DOOL Spoilers – Is There Hope for Kristen DiMera?

When asking why she never told Brady and why she had to be alone with Eric, Kristen explained that she thought Eric should be the first to know. Some fans wondered if Kristen’s pregnancy was turning her into a decent human being. Days of Our Lives spoilers suggest that it is possible. Of course, it is also likely that she had a hidden agenda.

Brady responded by looking at Kristen will contempt, but at the same time, he pulled her in for a passionate kiss. So, what happened with “Bristen” during the one-year time jump?

According to Soaps.com, time jump teasers state that Kristen recalls what led her to leave Salem. No other clues are given, so all fans can do is speculate on this storyline. Did she lose the baby? Did she have a secret agenda to revealing Sarah’s secret and it exploded in her face?

It doesn’t appear that Kristen would ever leave Brady’s side as she was determined to get him back. So, something must have happened that forced her to leave Salem, but what could it be?

DOOL Spoilers – How Does This Affect Brady Black?

DOOL spoilers tease that how Brady is affected depends on if Kristen was able to deliver a baby. She had a high-risk pregnancy and was having troubling symptoms from the start. If she ended up losing Brady’s unborn child, then her absence might not really affect him.

However, if baby “Bristen” was born alive, then why are the parents living in separate towns? Would Brady really go through not having a relationship with yet another child? That seems unlikely because he mentioned recently the torture of not being there for Tate, the child he conceived with Theresa Donovan (Jen Lilley).

It seems that there might be a lot more to this story than fans realize. What do you think happens to Brady and Kristen? Did the child make it through delivery or did they end up losing the baby? What led to the scandalous Salemite leaving town?

The Bold and the Beautiful Spoilers: Hope Logan Refuses To Back Off – Destroying Two Marriages At Once