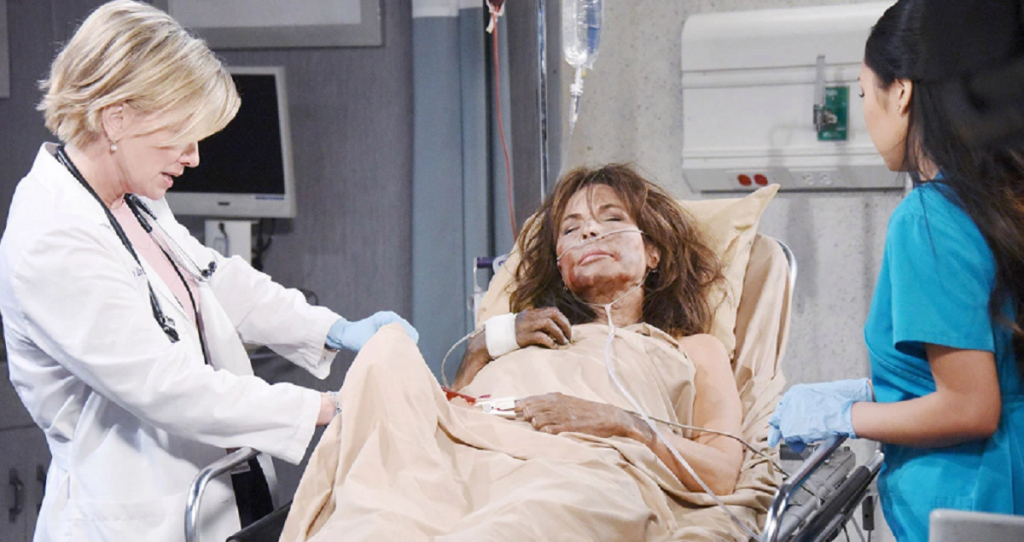 Days of Our Lives (DOOL) spoilers tease Kate Roberts’ (Lauren Koslow) medical ordeal is going to get worse before it gets better, if it ever does. It all started when Kate encountered Vivian Alamain (Robin Strasser) . Vivian’s presence quite a shock for Kate because Kate had shot her dead in cold blood last year.

She managed to get away with the crime by lying that is was self defense. But thanks to Dr. Rolf (William Utay) and his miracle serum, Vivian is the newest Salem resident to be not as dead as previously thought.

Vivian pulled a gun on Kate and shot her at point blank range. Vivian, as she is known to do, then pushed a bleeding Kate into an open grave and buried in Kate in it! Kate was still alive though, and somehow found the strength to claw her way out of the dirt.

She then managed to somehow make her way to University Hospital where she finally collapsed after stumbling out of the elevator. Luckily, Kayla (Mary Beth Evans) was right there and was able to have Kate cleaned up and taken to surgery.

Kate managed to survive but the damage was severe and still had not regained consciousness. Upon hearing that Kate was alive, Vivian knew that she had to finish her off again. She snuck into Kate’s hospital room. This time she tried to cut off Kate’s supply but after a few moments an alarm went off and a rattled Vivian quickly rushed out without being seen. Yet again, Kate survived but now was in coma, with machines currently needed to keep her alive.

Down the road, it seems there will still be no change in her condition and there may even some discussion about taking her off the machines and giving her heart to Julie (Susan Seathford Hayes) who still needs a heart to stay alive. Ultimately, this won’t happen because Lucas (Bryan Datillo) won’t give up on his mother. Both Julie and Kate will probably make it, but this experience is bound to have a profound on how Kate lives her life.

Kate has been in many misdeeds over the years. She has gone back and forth between DiMera Enterprises and Titan Industries and she loyalty to neither, going back and forth to get herself the best deal. These actions have made her a lot of enemies and makes people not trust her. So now she has somehow survived what should have been certain death. But can she really change her ways?

It would be nice to see a kinder and gentler Kate who is appreciative for this chance she has been given. Maybe she could even focus on having a meaningful relationship. She and Roman have always had a great connection, but her ambition has always kept from taking the time to find lasting love and happiness. Surely, Kate has amassed enough money by now she may find that by not focusing on power, she can enjoy her second chance. Maybe she will start a charity and find rewarding work in something other than a quest for power.

No matter what happens, viewers can except to see Kate rise from her ordeal. Hopefully she will learn something from all this. Days of our Lives viewers can except a lot of changes in the comings months so stay tuned weekdays on NBC and find out!

Days of Our Lives: Arianne Zucker Talks A Mermaid For Christmas, Her New Business and Spending Time with Daughter, Izzy