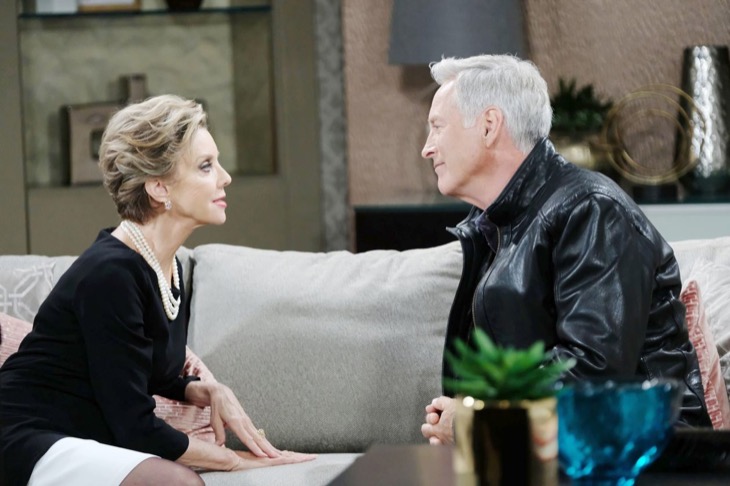 Days of Our Lives spoilers tease that Diana Colville Cooper (Judith Chapman) may just let “Roman Brady” as she knew him in the past, assume he’s Leo Stark/Matthew Cooper’s (Greg Rikaart) birth father! Of course, when Diana knew John Black (Drake Hogestyn) in the past and they were romantically involved and eventually engaged, he and everyone else in Salem assumed he was Roman Brady because that’s all they knew.

Eventually, John started having memory flashes of Dr. Marlena Evans, (Deidre Hall) who he had rejoined as his wife when he and everyone thought he was Roman, and Diana broke off the engagement and left town at that point.

But prior to the breakup and Diana’s leaving town, she had also been involved with Victor Kiriakis, (John Aniston), supposedly pretending to date him to find and take possession of a computer disk showing the location of a rare and precious mineral, that her mother Serena Colville (Valerie Karasek) was trying to find also.

In the latest #DAYS, John is shocked to realize he knows Leo's mom.https://t.co/ZsCmioRrzb pic.twitter.com/ihPoNs2uO9

This was around the same time she started becoming seriously involved with Roman/John after saving Carrie Brady (then Christie Clark) from drowning in a river. There are some hints in the timeline of their relationship that Victor could be Leo’s father as well as Roman/John.

It was plain to see when Diana answered the knock on her door and saw “Roman” through the peephole that she’s never gotten over him. John seemed to become emotional realizing “Diana Cooper” was his ex-fiance as well. They say one never gets over their first love, and they may indeed have been each other’s, first true love.

They consummated their relationship in Greece when they and some other Salemites attended Justin and Adrienne Kiriakis’ (Wally Kurth, Judi Evans Luciano) wedding, which was also when Victor, Serena, and Diana were all looking for that computer disk! As much as Diana appears to be still in love with John, she may think she might have a workable tie to him to get him to come back with her if he thinks they have a son together!

Days of Our Lives fans think either Victor or John could be Leo/Matthew’s birth father, and it would be nice comeuppance to Leo if John Black were his father, since when he hit on Brady Black (Eric Martsolf) he would have been kissing his half-brother!

Even Leo might be a little put off if he were to find that out! If Victor is his father, that would make for lots of soapy conflict between the two, and either way, he’s distantly related to Sonny Kiriakis (Freddie Smith)! Stay tuned to Days of Our Lives and keep checking Days of Our Lives spoilers frequently to see all the exciting news and developments in Salem!