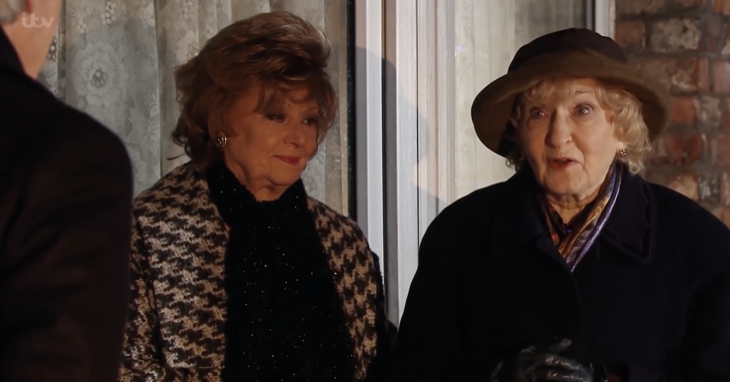 It all begins when Coronation Street Rita Sullivan (Barbara Knox)  was left shocked over information that Mary Taylor (Patti Clare) shared with her. She was at The Kabin to give Rita an update about a few of her friends, including Norris Cole, (Malcolm Hebden) Emily Bishop (Eileen Derbyshire) and Freda Burgess.

Apparently, Norris, who was last seen back in 2017, has been traveling with Emily and Freda. And now it looks like he might be returning to Weatherfield sometime this year. As a matter of fact, there’s speculation that the sale of The Kabin might be the start of a new storyline for him.

Meanwhile, Emily’s last appearance on Coronation Street was back in January of 2016, when she abroad to Peru to volunteer with her nephew. She currently lives in Edinburgh with Freda, who fans saw last almost a decade ago. As many viewers can recall, Norris didn’t get along very well with Freda, thinking she was trying to con Emily out of her money. Eventually, they did get along, seeing how they both disliked Norris’ half-brother Ramsey Clegg.

"Norris is selling but I'm not buying" 💔

So does this mean that the three characters are looking to make a Weatherfield comeback? That’s what fans are hoping. Some took to their Twitter accounts to write, “I do miss Norris, especially his scenes with Mary,” along with, “Nooo, we want Norris back and Emily too.”

So far Coronation Street producers have not made any comments as far as who is returning or who might be leaving for that matter. Tell us, how do you feel about seeing so many beloved characters returning to Weatherfield? What do you think is in store next? Let us know by leaving us a line with your thoughts in our comments section below.

Coronation Street airs weeknights on the ITV network and is available on Britbox in the U.S. Check your local listings for times. In the meantime, don’t forget to come back to Soap Opera Spy for all the latest news, updates and spoilers on Coronation Street and all of your favorite British soaps right here!