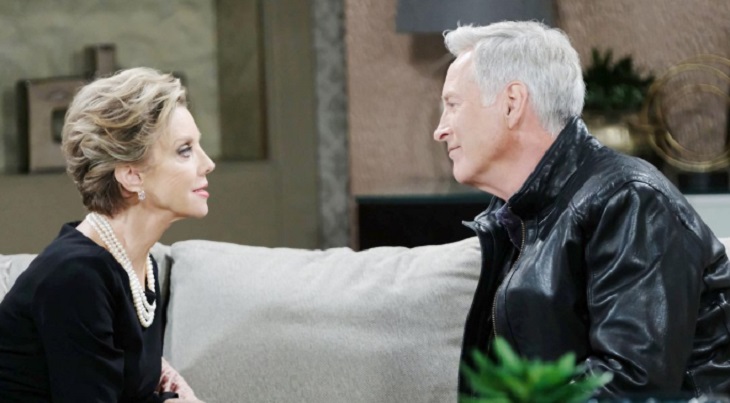 Days of Our Lives (DOOL) spoilers tease that John Black (Drake Hogestyn) will spend some time reconnecting with his old flame Diana Colville (Judith Chapman), who’s been using the name Diana Cooper around Salem. But she’s none other than Diana Colville, with whom John had a relationship back in the 1980s.

John and Diana were an item back when John believed he was Roman Brady. Of course, it was later revealed that the real Roman Brady (then portrayed by Wayne Northrup) was very much alive, but that was after Diana had broken up with John and left Salem.

Days of Our Lives Spoilers – John Stunned Diana Is Back

John will be stunned to realize that the Diana Cooper he tracked down for Will Horton (Chandler Massey) is his former love. Diana is Leo Stark’s (Greg Rikaart) mother, and John will probably find it hard to believe that the sweet Diana he knew and loved back in the day could produce someone as horrific as Leo.

It seems that the years must have changed Diana. She and Leo don’t have a good mother-son bond and don’t get along at all. The two appear to have some big secrets tucked away that could come back to bite Leo if they were to get out.

And that’s the very reason that John went looking for Leo’s mom in the first place. He and Will are hoping that she’ll turn on Leo and help them get him out of Sonny Kiriakis (Freddie Smith) and Will’s life. Diana’s appearance certainly surprised Leo, who clearly has something to hide.

But it seems that Diana may be harboring another secret that John will be very interested in on a personal level. According to Days spoilers, John will confide in Roman Brady (Josh Taylor) that he suspects Leo could be his son. Leo’s age would be just about right for him to be John’s son if Diana had left Salem pregnant all those years ago.

Days of Our Lives Spoilers – John Fears Leo Is His Son

Of course, this is a situation that John will have to handle delicately. Presumably there was a Mr. Cooper in the picture at one point who Leo considered – and may still consider – to be his dad. But knowing John, he’ll want to get to the bottom of the story and find out if he indeed has another son.

Do you think that Leo is John’s son?