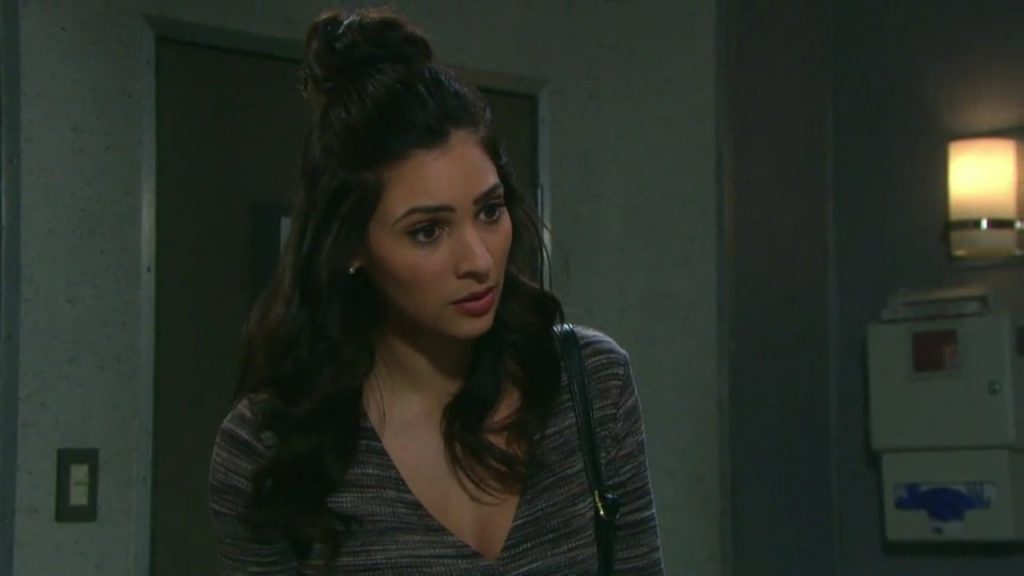 Days of Our Lives (DOOL) spoilers reveal Gabi Hernandez DiMera (Camila Banus) is torn. It happens when the father of her child, Will Horton (Chandler Massey) confronts her. He asks the fashionista if Vivian Alamain (Robin Strasser) shot Kate Roberts DiMera (Lauren Koslow). Will she keep lying in order to please Stefan DiMera (Brandon Barash) or tell Will the truth?

Even though Gabi and Kate don’t see eye-to-eye right now, the two have a solid history. Gabi considered the DiMera CEO to be her mentor. She asked her to look over the business plans for Gabi Chic before she even started the company. Plus, Kate helped Gabi dispose of Nick Fallon’s (Blake Berris) body when the Latina thought she killed him.

However, she is also loyal to her husband, Stefan DiMera. He doesn’t want his mother going to prison for shooting Kate. Out of her love for Stefan, she hasn’t turned in Vivian — at least, not yet.

After being shot and buried, Kate was able to dig herself out of the cemetery. She managed to stumble to the hospital and collapsed after getting off the elevator. She was in surgery, then Vivian decided to finish the job. She suffocated Kate by cutting off her air supply.

Even though it was just a temporary squeeze on the oxygen tube, it was enough to plummet Kate into a coma. Now, nobody knows if she is going to wake up or not.

Days of Our Lives Spoilers – Will Horton’s Confrontation

Days of Our Lives spoilers reveal everyone is asking questions about Vivian. Eli Grant (Lamon Archey) went to the DiMera mansion to question Vivian. However, Stefan claimed his mother was napping. At first, Gabi wanted to expose Vivian for shooting Kate but hasn’t yet because of her love for Stefan.

Even though Gabi keeps getting questioned, she insists on not knowing anything. This is until Will Horton confronts her about the shooting. Remember, Will is the father of Gabi’s daughter and is also the grandson of Kate, so he has a personal interest in this case.

DOOL Spoilers – What Happens Next?

It isn’t known if Gabi confesses to Will or if she lies to him. What we do know is that Kayla Johnson (Mary Beth Evans) runs tests to see if Kate’s heart would be a good match for Julie Williams (Susan Seaforth Hayes). It turns out it is and Lucas Horton (Bryan Dattilo) agrees to donate his mother’s heart to an ailing Julie.

However, it is also teased that with Brandon Barash leaving DOOL, the character of Stefan DiMera might die. If that happens, then Kate might get some extra time to wake up from her coma, and Julie could end up with Stefan’s heart.

General Hospital Spoilers: Olivia Comes Down Hard On Lulu And Dustin While They’re On A Date

Days Of Our Lives Spoilers: Sami Falls In Love With EJ Again, But Triple Threat Hits…