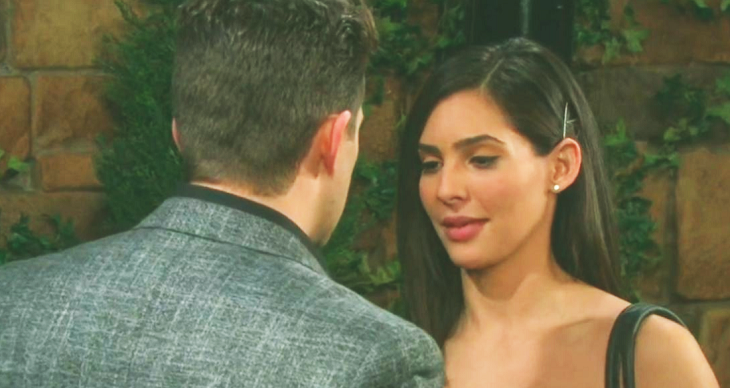 Days of Our Lives spoilers tease that Gabi Hernandez (Camila Banus) will unfortunately have to give Stefan DiMera (Brandon Barash) some disappointing news soon on Days of Our Lives!

Days of Our Lives viewers will recall that when Stefan was first arrested for the kidnappings of Ted Laurent (Gilles Marini) and Kate DiMera (Lauren Koslow) Gabi asked Eli Grant (Lamon Archey) for some time alone with Stefan to talk, which Eli allowed.

Between the two of them, Stefan and Gabi realized that there might be a connection between “Nicole Walker” (Adrienne Zucker) and the two kidnappings. Gabi recalled when she and Stefan tried to send “Nicole” who was Kristen DiMera (Stacy Haiduk) in disguise, down to the wine cellar to bring up champagne for the joint Gabi Chic/Basic Black launch party they were planning, she returned and said she couldn’t find it.

Then when Gabi went to get it there was “Nicole” again and she physically blocked her from entering! Gabi tried again on Wednesday’s Days of Our Lives episode to talk Kate into telling the truth of who kidnapped her. She was hoping to take suspicion off of Stefan.

Days of Our Lives viewers know that Kristen threatened the lives of both Ted’s and Kate’s loved ones if they did not implicate Stefan in their kidnappings. Kate was worried about her children being killed. Ted was worried about Hope Brady (Kristian Alfonso) being killed. So even though Ted didn’t really care to falsely implicate Stefan, he did and continues to blame him.

Kate could care less about Stefan and continues to implicate him as well. She also threw Xander Kiriakis (Paul Telfer) under the bus and implicated him also. He got out of it by blaming Stefan. He agreed to an immunity deal to turn “state’s evidence” against Stefan. Kristen and Xander may have to manufacture some evidence to corroborate the verbal testimony, however.

It is likely that Gabi’s inability to change Kate’s mind about her testimony and the updates about Xander and his immunity deal are the bad news that Gabi has to tell Stefan.

Ted might under other circumstances even be willing to help Stefan by representing him. But it would be a conflict of interest for him. It would also endanger his life and that of Hope, who he has fallen in love with.

Stefan will need to hire another lawyer. And he may have difficulty doing so with his less than stellar reputation in Salem as the son of Stefano DiMera (Joseph Mascolo). Although his half brother Chad DiMera (Billy Flynn) had better success gaining trust in the community.

Perhaps Abe Carver (James Reynolds) will know someone willing to represent Stefan. And Abe’s training as a policeman might help dig out the truth of the situation.