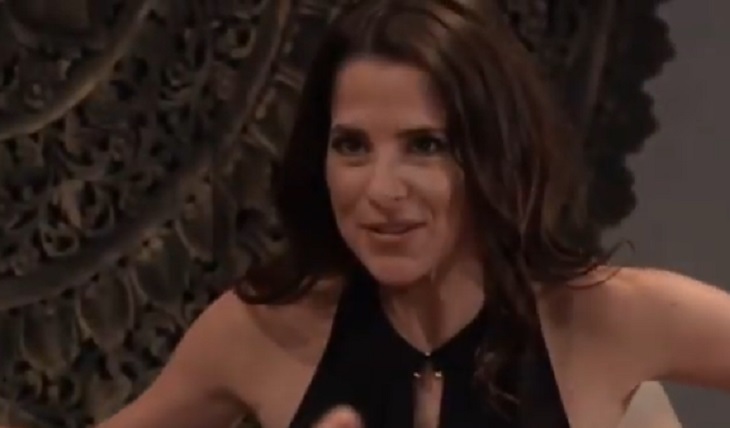 General Hospital (GH) spoilers for Thursday, July 18 tease that Sam McCall (Kelly Monaco) will surprise Jason Morgan (Steve Burton) will a dinner. They haven’t spent much time together so this is much needed to reconnection.

Sam will tell Jason how much she appreciates him as they worked together to bring Shiloh Archer (Coby Ryan McLaughlin) down. She couldn’t have done it without him, adding they are a wonderful team!

The one thing Valentin Cassadine (James Patrick Stuart) shouldn’t do is push Curtis Ashford (Donnell Turner) around—and that’s what he tries to do. GH spoilers say that he’s anxious to get the goods on Jasper Jacks (Ingo Rademacher), complaining that it’s taking way too long.

Curtis won’t like his attitude and he replies that he hired him to get it done right, so now he’ll have to be patient with him. Valentin has no other choice but to agree at this point.

Speaking of Curtis, he will have his own troubles. He is worried that his wife Jordan Ashford (Brianna Nicole Henry) is taking on too much too soon after her transplant. He will voice his concerns, which she tries to brush them off. In the GH preview, it looked like Jordan wasn’t happy about Curtis’ comments.

After threatening to leave many times, Sasha Gilmore (Sofia Mattsson) will announce she’s leaving. GH spoilers tease it’s not exactly as it appears. She will announce she is leaving, only to move to another place in Port Charles. She is having trouble leaving Michael Corinthos (Chad Duell).

Sasha will have a mess to deal with at some point. When the truth comes out on GH that Nina Reeves (Cynthia Watros) is not her mother, it will get messy for the character. She stands to lose her new mom and Michael.

Speaking of Nina, she will apologize to Liesl Obrecht (Kathleen Gati). She will confess that she may have done something bad and it affected her. There’s no telling what she will confess, but it sounds pretty juicy.

Liesl is one of the only people that know that Wiley isn’t Shiloh’s child. She doesn’t know the whole truth, but she knows enough. GH spoilers state that she may tell someone that there is no way that Shiloh was a match to Wiley’s DNA.

It shouldn’t be long until the truth comes out about Michael and baby Wiley. Imagine his shock when he realizes the lengths Nelle Benson (Chloe Lanier) went too so his family had no role in the baby’s life.
Do you think Valentin will find out anything juicy about Jax?