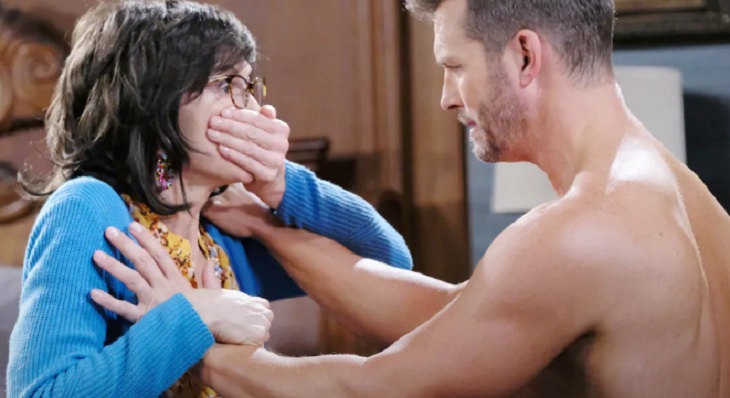 Days of Our Lives Spoilers – Susan Banks Is Back In Salem

It begins with the reappearance of Susan Banks (Kristen DiMera) back in Salem. She can’t contain her emotions when she sees Brady Black (Eric Martsolf), but little does he know that it’s not Susan, but Kristen playing yet another game of face swap. She now has to pose as Susan since Xander took her Nicole Walker (Arianne Zucker) mask. However, the more Susan flirts with Brady, the more he is turned off.

Speaking of Brady, he decides that it’s time to give Xander his walking papers from Titan Industries. Brady never wanted Xander to work for the family company in the first place and his arrest is enough of a reason to give him the boot. But that’s not the only problem that Xander has on his hands these days.

There’s also the fact that Kristen DiMera threw him under the bus before his arrest and now he’s wanting to seek his revenge on her. But it won’t be very easy. The two will be playing a cat and mouse game until someone ends up getting caught. Seeing how Xander is hellbent on making Kristen pay (especially since he was so loyal to her up until his arrest), she might want to watch her back.

Will Horton makes a startling discovery that will change the course of his future. While his treatment has been working very well up to this point, he didn’t expect for this to happen. Elsewhere, and after much thought, Jack Deveraux (Matthew Ashford) decides that it’s time to do something about his lost memories. He makes a huge decision and thinks that the memory restoration serum is worth taking, seeing how it also has an antidote to other issues. Even though the antidote was initially developed for Will, that doesn’t mean that it will work for Jack. Of course, the last thing that he needs to deal with is a deadly brain tumor as well.

Days of Our Lives Spoilers – Hope And Ted Kiss

Meanwhile, Ted gets an offer that he can’t refuse. Hope is so happy to see her boyfriend back that she can’t help herself and gives him a kiss that sparks a brand new romance between them. However, their moment might not last very long, especially when Hope’s daughter Ciara Brady (Victoria Konefal) catches wind of what’s going on between her mother and the handsome district attorney.