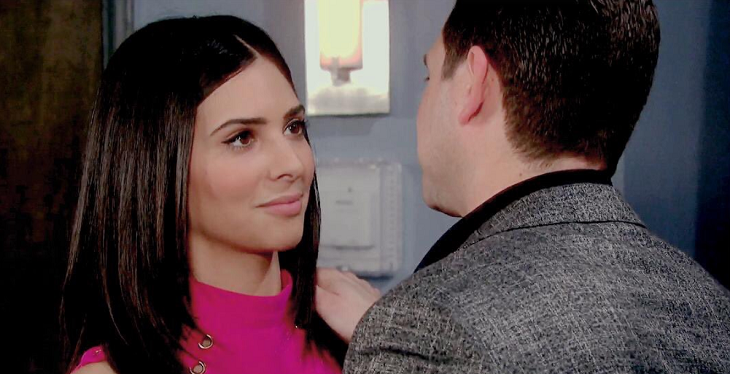 Days of Our Lives spoilers tease that Gabi Hernandez (Camila Banus) will beg Stefan DiMera (Brandon Barash) to marry her to save DiMera Enterprises.

On a recent Days of Our Lives episode, Stefan learned he had been suspended because of his criminal charges. He’s been implicated in the kidnappings and imprisonment of Ted Laurent (Gilles Marini) and Kate DiMera (Lauren Koslow). He had also heard Mr. Shin (Michael Hagiwara) was getting ready to replace him. Gabi nearly panicked upon hearing this.

Also, fake Nicole Walker (Adrienne Zucker) was talking to Brady Black (Eric Martsolf) about taking over DiMera and getting it out from under Stefan. He told her that the company charter had stipulations that only family members could be CEO’s, or Chief Executive Officers.

He likely learned that from when Chad Dimera (Billy Flynn) was part of Titan Enterprises. Of course Brady doesn’t know that fake Nicole actually is a DiMera – Kristen DiMera (Stacy Haiduk)! But this is probably the reason that Gabi will beg Stefan to marry her. So if he cannot continue being CEO then maybe she can, as his wife and a DiMera by marriage.

Gabi’s original plans to take over DiMera was to seduce Stefan, make him fall in love with her, and then marry her. So this situation fits right in with her original plans, but at the same time, as Days of Our Lives viewers know, she has been trying to fight her feelings for him, falling in love with him in spite of herself.

Viewers saw her in a recent scene telling herself out loud, “stick to the plan”! She will use the situation of his being a “lame duck” and in danger of being replaced to convince him to marry her. Then they can get rid of Nicole and run DiMera together. Although, he will be behind the scenes until he is cleared of his criminal charges.

Stefan’s not quite sure they should rush into a marriage to one another. This is in spite of Gabi’s idea to save DiMera and that her being a DiMera would allow her to lobby for the CEO job with Mr. Shin and the board.

But he eventually sees that it may be the only way they can keep the company and even take it over completely. So he agrees and they get married and start the lobbying process.

They contact Mr. Shin and advise him that they are married. They tell him Gabi will be a competent CEO for DiMera. She is the CEO of her own company under the DiMera umbrella, Gabi Chic.

The fight for DiMera and for Stefan to clear himself promises exciting drama for DOOL fans over the next few weeks. Stay tuned to Days of Our Lives and keep checking Days of Our Lives spoilers frequently for all the latest news, updates and developments!