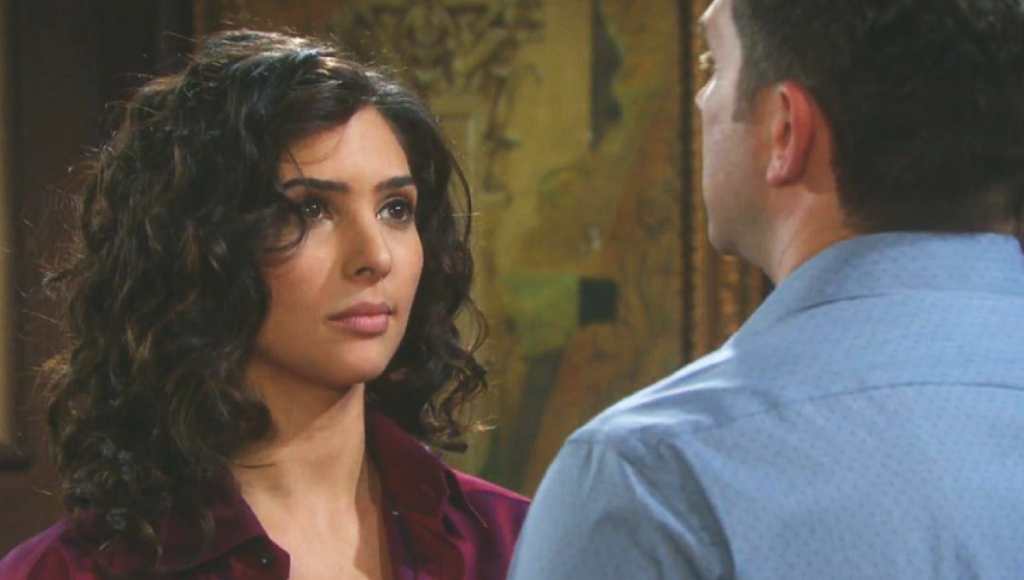 Days of Our Lives spoilers for Monday, July 29thfinds Kristen DiMera (Stacy Haiduk) proposing marriage, but it’s not to Brady Black (Eric Martsolf). Also, Jack Deveraux (Matthew Ashford) is finally pulling the plug on his marriage to Eve Donovan (Kassie de Paiva) while Stefan DiMera (Brandon Barash) and Gabi Hernandez (Camila Banus) get to work in planning their own wedding. There are certainly a lot of make-up and break up activity going on in Salem this week. Here’s what you need to know.

Days Of Our Lives Spoiler – Kristen DiMera Wants To Get Married

It begins with Kristen DiMera deciding to do something very risky. She marries her own brother. But she does it while wearing a Nicole Walker (Arianne Zucker) mask, of course. Seeing how she needs to oust Stefan from the CEO chair at DiMera Enterprises, Kristen puts on her Nicole mask and tells Tony DiMera (Thaoo Penghlis) that she wants to get married. This way the two of them can work together to hopefully kick Stefan to the curb once and for all.

Elsewhere, Jack has had enough of all the lies and the manipulation that has come his way, thanks to his wife Eve Donovan. He might not have his memories back, but if there’s one thing that remains the same it’s his hate for the leggy blonde. After realizing that Eve tried to give him a fake serum, Jack is now demanding a divorce. He is angry that she is trying to keep him from knowing his past.

Not only does Jack tell Eve that he wants a divorce, but he also fires her as the city police commissioner. He replaces Eve with Eli Grant (Lamon Archey) the next day. Eve is furious but this won’t be the last that we see of her. As a matter of fact, she already has a plan in mind to get her revenge out on everyone.

Also, Stefan and Gabi are doing whatever it takes to get married and fast, too. If they rush to the altar, that means Gabi could be CEO of DiMera Enterprises while he sorts out all of his legal troubles. Once Kristen catches wind of all this, it’s without a doubt that she will put a stop to it.

Days Of Our Lives #DOOL Spoilers: Jennifer Confronts Eve About Her Deception https://t.co/IeucSOgYjK

Also, Will Horton (Chandler Massey) wants to know more about the new romance between Hope Brady (Kristian Alfonso) and her new lover Ted Laurent (Giles Marini). Will is still not sure if Ted is the kind of person who can be trusted. Sarah Horton (Linsey Godfrey) will also make a huge misstep in her ever-increasingly tangled love triangle that is getting more complicated by the day. Of course, fans will have to tune in to find out what will happen next!