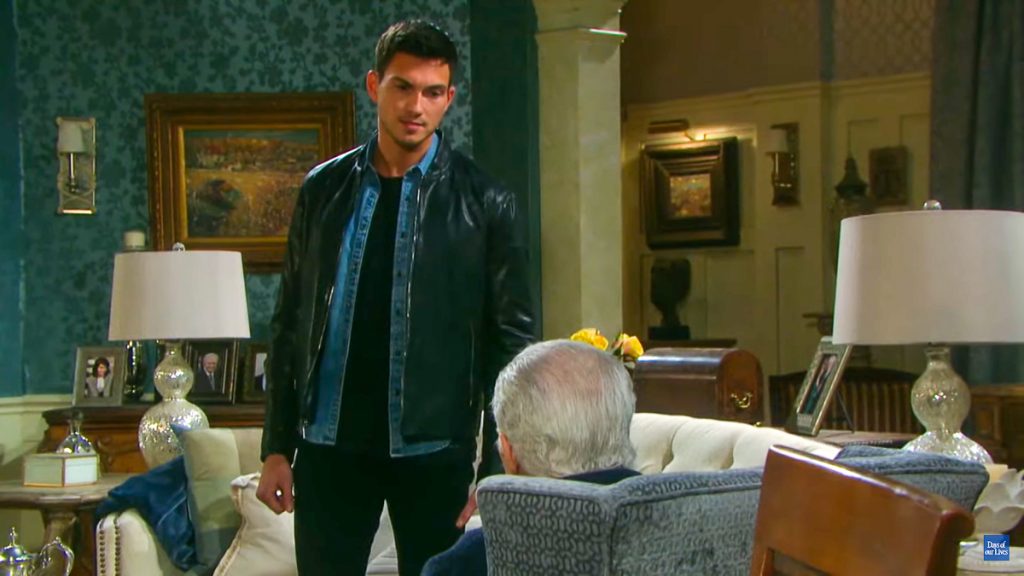 Days of Our Lives spoilers tease that Ben Weston (Robert Scott Wilson) may regret asking Victor Kiriakis (John Aniston) for help. There is always a price to pay with the patriarch. Even though Ben thinks Victor owes him, that may not be how he sees it. Plus, will Victor go against Ben’s wishes and have Jordan Ridgeway (Chrishell Hartley) killed?

On Wednesday’s episode of DOOL, Ben paid Victor a visit. When he first arrived, he asked the Kiriakis patriarch to get rid of Jordan. Considering that Ciara Brady (Victoria Konefal) is his grandfather, he agreed to handle it.

However, it seems that Ben might be having a change of heart. Despite his quest to save Ciara, he doesn’t want Jordan killed. Instead, he just wants her to go somewhere else. As he put it, “can’t you just ship her off somewhere far away?”

Despite repeated warnings, Jordan just can’t stop antagonizing Ciara. She never makes any direct threats, but it is clear what her plans are for Ben’s girlfriend. When they ended up in an elevator together, Jordan could have gotten off or just stayed quiet. However, she decided to be aggressive and pushed the emergency stop button. Then, she ranted about how Ben just wants to get rid of her. She keeps claiming that Ben is the threat, not her.

Days of Our Lives spoiler suggest that once Ben finds out about this, he will be livid. Sincerely concerned for Ciara’s safety, he knows something has to be done. But is eliminating Jordan really the right answer?

Days of Our Lives Spoilers – Will Victor Kiriakis Order a Murder?

DOOL spoilers indicate that Victor might not want to take any chances with Ciara’s life. Although Ben wants Jordan to just go away, he doesn’t want his sister killed. However, Victor might feel that killing her might be the only option. After all, his goal is to keep Ciara safe.

With that being said, Victor still doesn’t trust Ben. Could he order a hit on Jordan and make sure that Ben is implicated in the crime? That would kill two birds with one stone: getting rid of both Ben and Jordan.

If Jordan ends up dead, this will cause Ciara to wonder if her boyfriend is responsible. She knows all about his past. In fact, she was the only person that would give him a chance after his Bayview release.

Even though he is a good guy now, Jordan’s death could raise suspicions. Everyone knows how desperate and determined Ben is about the Jordan situation. If she ends up dead, the prime suspect would be her own brother. Even Ciara would wonder if he saved her by eliminating the threat — permanently.

Neighbours Spoilers: Hendrix Crashes Car– Will Pierce Have A Breakthrough With His Son?