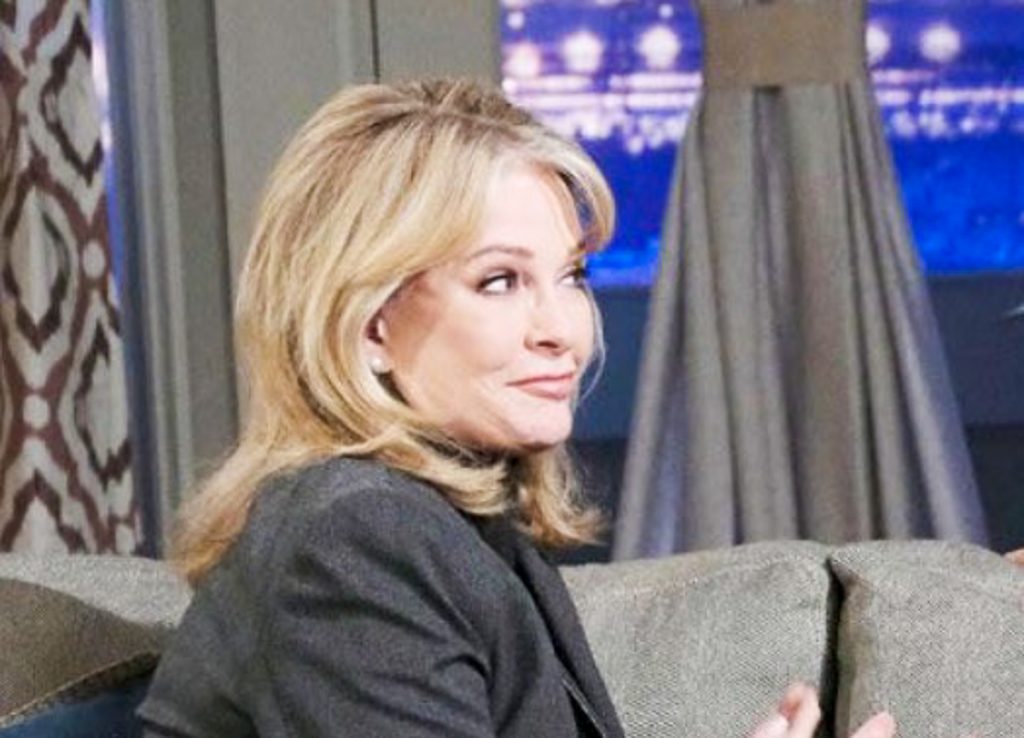 “Hope Brady” (Kristian Alfsono) who as Days of Our Lives viewers know has been programmed into Princess Gina for over a year now, is upset when John Black (Drake Hogestyn) gives into his wife, Dr. Marlena Evans (Deidre Hall) who has given him an ultimatum about Hope moving out!

Princess Gina is probably wondering when “Steffy” Stefano DiMera (Stephen Nichols) is going to hurry up with his plan to reclaim Marlena as his “Dark Queen” so she can have John, formerly known as “The Pawn!” However, it would seem that as long as Steffy is fooling around with Katerina – Kate Roberts (Lauren Koslow) he may be a little bit too preoccupied to pursue Marlena! Stefano DiMera – a player?

Meanwhile, Marlena confides in a guilty Kate. It’s a little difficult to milk guilt out of Kate unless it’s something family related so perhaps they are talking about their mutual grandson Will Horton (Chandler Massey) and his request for a divorce from his husband Sonny Kiriakis (Freddie Smith) which was definitely instigated by Kate who went to Statesville Prison in a recent episode of Days of Our Lives.

She warned Will about Evan Frears (Brock Kelly) and his flirting with and kissing Sonny, and to boot, she reamed Evan out too, who apologized to her. Poor Sonny was in tears when Will told him he wanted a divorce, but he acknowledged that it was probably the right thing to do.

Jack Deveraux (Matthew Ashford) comforts an unsettled Jennifer Deveraux, (Melissa Reeves) who knew their son JJ Deveraux (Casey Moss) was depressed, but didn’t realize how off kilter he was until Eli Grant (Lamon Archey) brought him home from Rome and the whole story came out about his desperate attempt to kill Kristen DiMera (Stacy Haiduk) and his descent back into addiction.

Days of Our Lives viewers will recall that Julie Williams (Susan Seaforth Hayes) tried to help JJ in yesterday’s episode, as he was starting to struggle with withdrawal. He hallucinated Haley Chen (Thia Megia) telling him to get off the drugs and to keep living – for her – and he promised. He will tell his parents the whole story soon, but for now Jack needs to keep Jennifer calmed down about JJ being in the hospital.

Now that Detective Rafe Hernandez (Galen Gering) knows that it was Dr. Wilhelm Rolf’s (William Utay) image superimposed over Eve Donovan’s (Kassie DePaiva) in the security tapes from “The Bistro” the night Jennifer was pushed over the balcony railing, he attempts to hunt Rolf down and bring him to justice. Stefano – or should that be Steveano – has more than likely already gotten Rolf out of Salem and quite likely into a foreign country where the long arm of the law in Salem isn’t long enough to reach, at least without extradition papers!