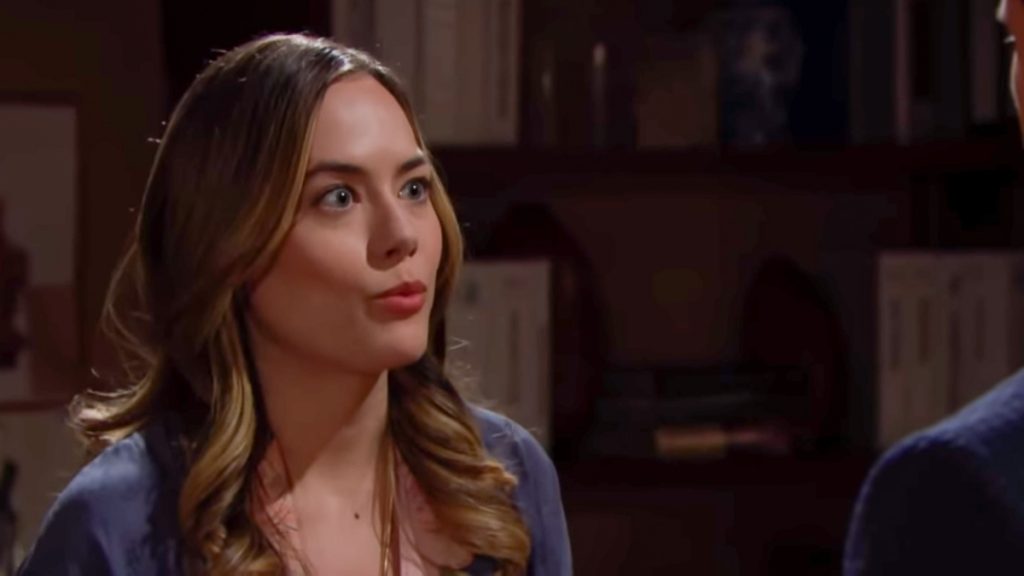 The Bold and the Beautiful spoilers for Wednesday, December 18, tease that Thomas Forrester (Matthew Atkinson) will really put on a show. As B&B viewers know, Hope Logan (Annika Noelle) has just found him in the Forrester design office, and the whole place is decked out with candles and low lighting. Hope naturally assumed that the setup was intended for her and she went ballistic, telling off Thomas and explaining how it was all inappropriate.

But then Zoe Buckingham (Kiara Barnes) walked in, and Hope got a huge surprise. Thomas proceeded to explain that the romantic setup was intended for Zoe, and that he and Zoe were moving forward together as a couple. Well, that absolutely floored Hope, and she reeled from the news.

On Wednesday’s B&B episode, it looks like Hope will get quite an eyeful as she watches Thomas and Zoe together. Thomas will want to make his burgeoning romance with Zoe look legit, so he may play up the whole situation for Hope. Of course, the whole romance with Zoe is just a ploy on Thomas’ part – as B&B viewers know, he just wants to make Hope want what she can’t have.

Plus, Thomas is hoping that Hope will see that Thomas has moved on and then decide that she’ll be able to work with him on her line for the fashion showdown. Thomas knows that Hope is getting desperate for a designer for Hope For The Future, and he figures that his best bet on joining her team is if she believes that he’s in a new relationship with Zoe.

Meanwhile, on Wednesday’s new episode of B&B, Steffy Forrester (Jacqueline MacInnes Wood) will reach a decision. As B&B viewers know, Liam Spencer (Scott Clifton) has been pressuring her to rehire Zoe at Forrester Creations. Liam wants Zoe to spy on Thomas for them, in order to find out what Thomas is up to with Hope.

Well, Liam figures that if Steffy rehires Zoe, then Zoe and Thomas will end up spending more time together and Zoe can find out exactly what Thomas’ intentions are regarding Hope. Liam’s convinced – and rightly so – that Thomas is still obsessed with Hope, and he wants the proof he needs to convince Steffy and Ridge Forrester (Thorsten Kaye) that Thomas isn’t really reformed as he claims to be.

Bold & The Beautiful Spoilers – Zoe Buckingham Falls on Her Sword

But Steffy has been balking at the idea of rehiring Zoe, saying that she doesn’t think Zoe is trustworthy. According to B&B spoilers, Zoe will once again make a big appeal to Steffy saying how sorry she is about everything that went down with Beth Spencer (River Davidson and Madeline Valdez) earlier this year.

Of course, B&B viewers know that Zoe kept the secret about Beth’s existence, kidnapping, and illegal adoption from Steffy, Hope, and Liam for months, and that’s not something that Steffy can just overlook. But due to Liam’s pressure, Steffy will rehire Zoe, but there will be an unforeseen complication – Zoe will now be in a romantic relationship with Thomas.