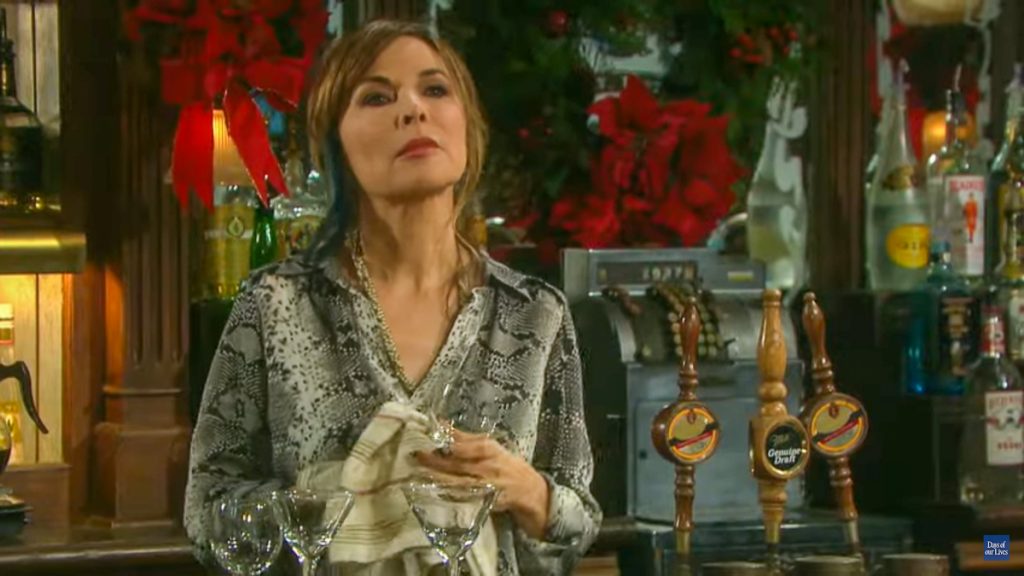 Chad DiMera (Billy Flynn) confronts Kate Roberts (Lauren Koslow) about Stefano DiMera (Stephen Nichols) in Tuesday’s episode. Perhaps Chad has been suspicious that Stefano has been in touch with Kate as well as with him, even though when she snooped and looked at his cell phone messages in previous Days of Our Lives episodes, she played dumb.

Days of Our Lives viewers know that Kate has known Stefano is alive for much longer than anyone else, and that they have been involved with one another, in spite of his looking like Steve Johnson (Stephen Nichols) and his trying to get his “Queen Of The Night” back – Kate must have some “thing” for him if she’s willing to be with him in spite of all that! Chad will be asking Kate some pointed questions in Tuesday’s episode!

Dr. Marlena Evans (Deidre Hall) gives John Black (Drake Hogestyn) an ultimatum about “Hope Brady” aka Princess Gina (Kristian Alfonso). “Hope” made up a story about her house being under renovation and some excuse about staying with her parents and had convinced John to let her stay with him while Marlena was out of the country.

Of course, Gina has been trying to get John to reconcile with her while playing Hope Brady, and John has a boundary up there, not to mention an actual past love of his, Diana Cooper (Judith Chapman) wasn’t successful either. Marlena is the only girl for John, but now she wants him to prove it by getting “Hope” out of the house!

Julie Williams (Susan Seaforth Hayes) takes on the care, nurture and feeding of JJ Deveraux (Casey Moss) as well as helping him with his struggles to stay sober and off the pills he has become addicted to.

There’s nothing like a grandma to cure what ails one, and even though she’s not his literal grandma and more like a great great aunt, she’s a grandma to JJ! Longtime Days of Our Lives viewers will recall that JJ’s mother, Jennifer Horton Deveraux (Melissa Reeves) was raised with Hope so they are more like sisters than cousins – that is, when Hope is herself and not Princess Gina!

Lani Price (Sal Stowers) and Kristen DiMera (Stacy Haiduk) come up with a plan to take back what is theirs in Tuesday’s episode, for Lani it will be Eli Grant (Lamon Archey) and for Kristen it will be Brady Black (Eric Martsolf) plus DiMera Enterprises. They will have to figure out a way first to get that killer app – literally – off of Gabi DiMera’s (Camila Banus) phone, after figuring out how to find out if it is still there! Lani’s biggest fear is that if she tells Eli what really happened and why she really dumped him, is that Gabi will kill Julie by using that app to control her pacemaker!