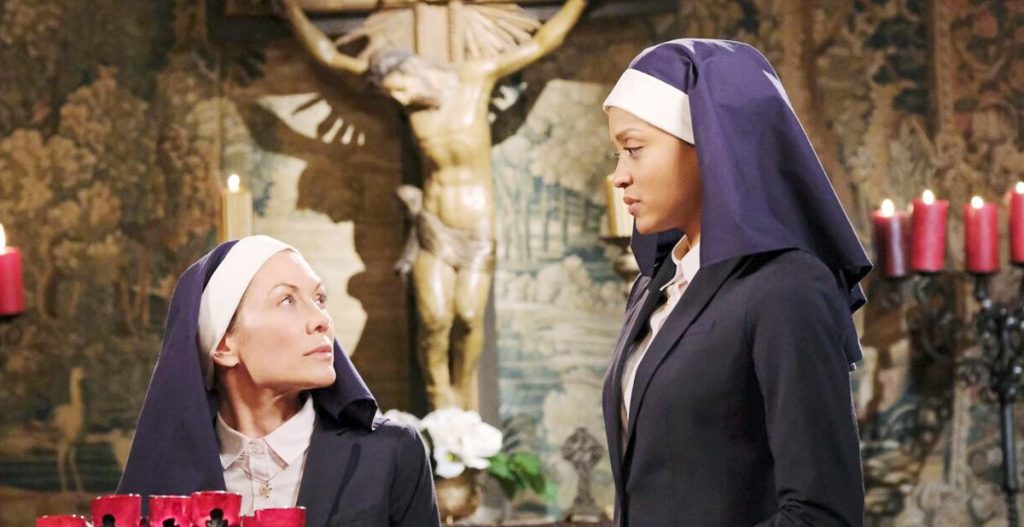 Days of Our Lives spoilers reveal Kristen DiMera (Stacy Haiduk) and Lani Price (Sal Stowers) are together. During a recent interview, it was explained what bonds these two together. Plus, what exactly are they doing in a convent dressed as nuns?

DOOL spoilers indicate that Kristen and Lani may seem like completely different people. However, they do have two things in common. For one, they both are heartbroken over losing the men they love.

The second connection they share is losing a child. Kristen lost the baby she was having with Brady Black (Eric Martsolf) and Lani lost baby David, the son that she was delivered stillborn.

In the latest issue of Soap Opera Digest, actress Sal Stowers explained the storyline. She confirmed that Lani will eventually tell Kristen why she left Eli Grant (Lamon Archey) — and Salem. She will reveal all the details about Gabi Hernandez DiMera’s (Camila Banus) blackmail via pacemaker smartphone app.

Days of Our Lives spoilers tease that Kristen is livid when she finds out the truth. She urges Lani to return to Salem and expose Gabi. However, the former detective is still terrified that Gabi could kill Julie Williams (Susan Seaforth Hayes).

However, could she change her mind when she discovers that Eli is head of security at DiMera Enterprises? Not only that, but he is also now sleeping in Gabi’s bed, which should infuriate Lani.

The magazine article also hinted on the convent storyline. Fans were certainly confused as to why Kristen and Lani were wearing nun costumes. However, it is no joke and they aren’t in disguise.

“She believes with all of her heart that Eli is the only man for her, so therefore if she can’t be with Eli, she feels that turning herself over to the Lord is the only place where she can be forgiven.”

Remember, Kristen’s sister Mary Moira (also portrayed by Stacy Haiduk) is actually a nun, so there is a sisterly connection. That character might come back since the storyline is taking place in the convent. However, how will she tie into Lani’s story?