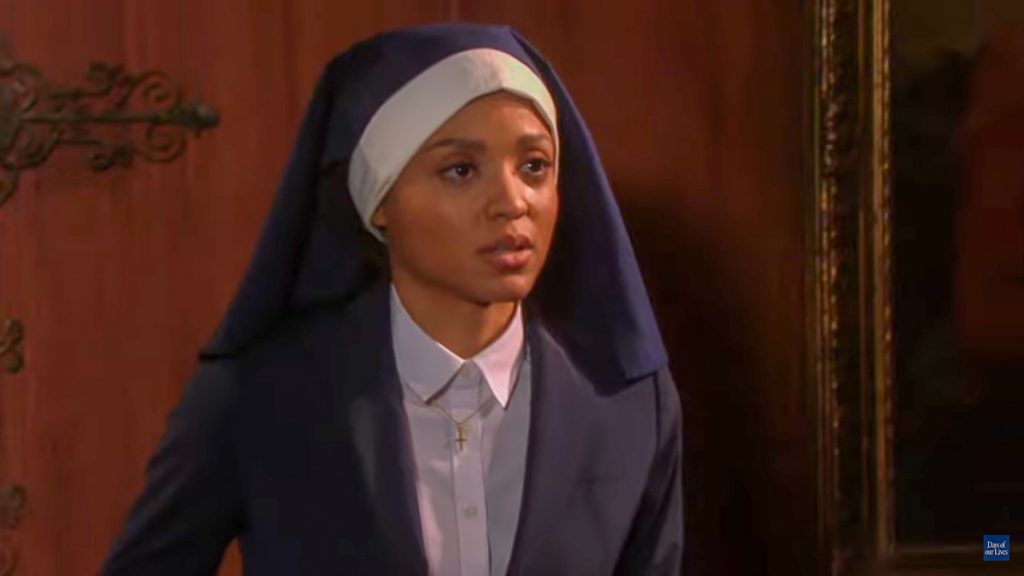 The Days of Our Lives weekly preview takes up where Friday, December 6th’s episode takes off, with Eli Grant (Lamon Archey) discovering Lani Price (Sal Stowers) as she is praying inside the convent, and JJ Deveraux (Casey Moss) discovering Kristen DiMera (Stacy Haiduk) in the convent’s garden and holding a gun on her.

Eli enters the convent’s sanctuary where he begins with “Excuse me, sister?” as he’s looking for Kristen, and she rises and turns around to face him. Both are shocked at who they see as Eli asks, “Lani? Why are you dressed like a nun?!” Meanwhile, in the garden, JJ is off the rails as he holds Eli’s gun, which he had stolen out of his suitcase in Friday’s episode on Kristen as she prays in the convent garden, shouting, “You killed my girlfriend! I’m sending you straight to hell!” as Kristen kneels and prays!

On Monday, Abigail DiMera (Kate Mansi) brings her mother, Jennifer Deveraux (Melissa Reeves) back to the scene of the crime as she takes her, in robe, pajamas, slippers, and a wheelchair to “The Bistro”. There she manages to get her upstairs and to the balcony where she was pushed over the railing a little over a year ago to try and jog her memory for more details of who might have pushed her.

Meanwhile, at Brady’s Pub, Kate Roberts (Lauren Koslow) is ignoring her boss, Roman Brady’s (Josh Taylor) instructions not to be so nosy as she’s looking over Chad DiMera’s (Billy Flynn) shoulder and reading his phone! Chad must feel her breathing down his neck (literally) and asks what she saw, since he admits to her that he’s been in contact with his father, Stefano DiMera (Stephen Nichols)! Also in Monday’s episode, JJ confronts Kristen about Haley Chen’s (Thia Megia) death, and Lani is stunned to learn that Eli is in a relationship with Gabi DiMera (Camila Banus)!

Tuesday, Lani makes her way out to the convent garden, probably with Eli right behind her and comes upon the horrible sight of a deranged JJ as he’s about to kill her! She makes a huge appeal to JJ to spare Kristen! Back in Salem, Abby questions “Hope Brady” who as Days of Our Lives viewers know has been turned into Princess Gina again and has been over a year thanks to Dr. Wilhelm Rolf (William Utay).

Abby likely questions her about things that Jennifer remembered the day before. Also in Tuesday’s episode, Gabi tries to throw Chad out of the DiMera mansion, and Kate has a secret that is revealed – she’s hiding a man in her room! Perhaps it’s Rolf?

Wednesday, Abby must be getting somewhere with her questioning, as “Hope” is tempted to eliminate her! It sounds like Princess Gina is getting really, really nervous! Abby must be getting close to the truth! Meanwhile, Eric Brady (Greg Vaughan) and Sarah Horton (Linsey Godfrey) receive a dire diagnosis for their ill baby, Mackenzie “Mickey” Horton (the May twins).

She is diagnosed with neuroblastoma, a cancer that develops from immature nerve cells found in several areas of the body. Neuroblastoma most commonly arises in and around the adrenal glands, which have similar origins to nerve cells and sit atop the kidneys. Also in Wednesday’s episode, Justin Kiriakis (Wally Kurth) moves in with Kayla Brady, (Mary Beth Evans) and Ben Weston (Robert Scott Wilson) informs Ciara Brady (Victoria Konefal) that his legal situation just got worse.

Thursday, Kate blasts Sonny Kiriakis (Freddie Smith) for sharing a kiss with Evan Frears (Brock Kelly) while still married to her grandson Will Horton (Chandler Massey) and Will being in prison. Sonny will wonder how she even knew, and it’s obvious she learned it from someone else, but who saw Evan kiss him after he returned the scarf he left at the Kiriakis house and told Kate? Maybe she overheard Evan talking about it with someone else, and he was vastly exaggerating his and Sonny’s relationship?

Meanwhile, Eric and Sarah make a big decision; they will travel with Mickey to Boston where a specialist in neuroblastomas in children and infants practices. Days of Our Lives viewers know Eric doesn’t make much money doing what he does for a living, and Sarah is a doctor but her insurance probably doesn’t cover out of state visits. Perhaps Xander Kiriakis (Paul Telfer) is allowed to be a hero by financing Mickey’s medical bills on the sly! He won’t stand by and just do nothing! Also in Thursday’s episode, Nicole Walker (Arianne Zucker) will reach out to Eric when she hears about Mickey’s condition, and Will and Justin come face to face.

Friday, “Hope” makes plans to flee Salem, feeling the pressure of Abby’s investigations to find the truth of who pushed her mother, Jennifer over the balcony of The Bistro, plus she will fear Jennifer will remember she was the one, as Princess Gina, who pushed her! She also lost patience with Jennifer as she saw from Rolf’s flash drive she had in the laptop she found that Rolf was trying to turn her into Princess Gina and she shouted at her that she was, and then pushed her over!

Meanwhile, Xander becomes suspicious of Ciara; he has caught her in his office several times and perhaps by now he’s needed to get into his metal briefcase and realizes it’s been replaced! Also in Friday’s episode, Chad helps Abigail investigate her mother’s case, and Jack Deveraux (Matthew Ashford) brings Jennifer home from the hospital, and they share a little romance!