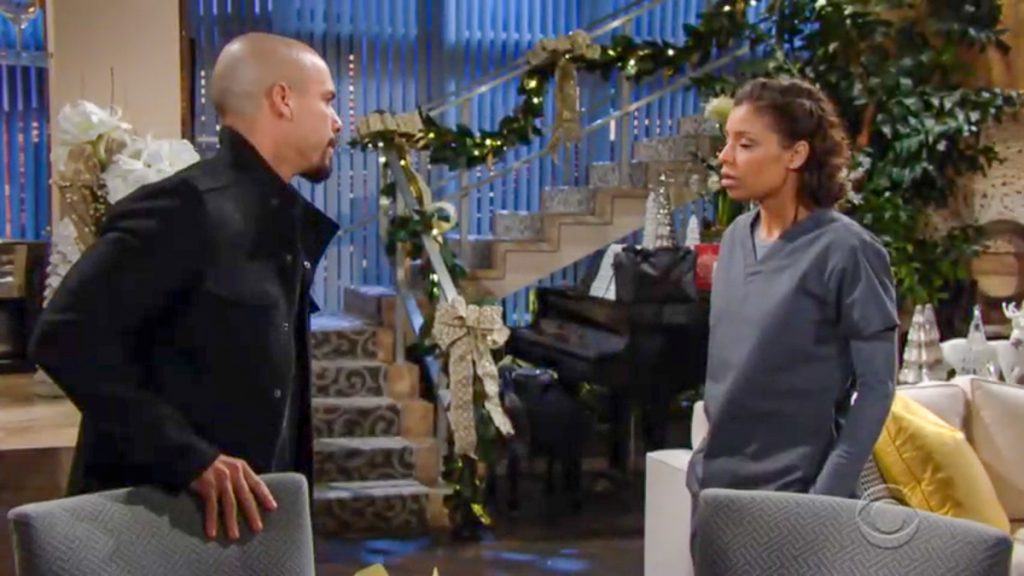 Nick Newman (Joshua Morrow) and Chelsea Lawson (Melissa Claire Egan) are being driven apart by her son Connor Newman’s (Judah Mackey) problems and her moving in with his father, and Nick’s half- brother, Adam Newman (Mark Grossman). As he and their sister Victoria Newman (Amelia Heinle) sit at a restaurant table enjoying their treats, Victoria says of Chelsea, “She’s either with Adam, or she’s with you. She can’t have it both ways!” Adam is Connor’s father, and a scene of Adam, Chelsea, and Connor sitting on Adam’s couch appearing to be a happy family together appears, which is what Connor wants and Chelsea is giving into their son’s desires.

Connor had been traumatized both by the faked death and then “resurrection” of his grandfather, Victor Newman (Eric Braeden) and subsequent decision by his father, Adam to move out of Genoa City and back to Las Vegas, just as Adam and Connor had started to bond. Nick actually went to Las Vegas and talked Adam into coming back because of Connor.

Then there was a hostage crisis at the Grand Phoenix, and Connor had been in the middle of it, and watched as his father, mother, and Aunt Abby Newman (Melissa Ordway) could have been killed! However, Nick has had about as much as he can take with the back and forth situation with Chelsea, and talks to Chelsea about the situation, becoming increasingly frustrated, and asks, “Are you going to live with your ex-husband till he goes off to college?” Chelsea doesn’t answer him, she just throws back her head and rolls her eyes in frustration! Nick tells her he doesn’t know how long he can keep doing this!

Y&R Spoilers – Devon Hamilton And Elena Dawson Are In Crisis

Meanwhile, Devon Hamilton (Bryton James) and Elena Dawson (Brytni Sarpy) are also in crisis, with Devon apparently taking a hit to his ego after giving his inheritance to Cane Ashby (Daniel Goddard) then later realizing that the authenticator of the two pages of Katherine Chancellor’s (Jeanne Cooper) will that left the money to Cane instead of to Devon may have been paid off to do so.

Devon obviously feels like a fool and now it’s eating away at both his ego and his self esteem because he doesn’t feel like he is good enough for Elena any more. Elena tells Devon she doesn’t think that she is clear on what he is trying to say to her, and Devon responds that he thinks she deserves to be with somebody better! Apparently when Devon inherited the money, even though he still has his company and plenty of income, he must have thought being wealthy made him a better person and maybe a more desirable person!