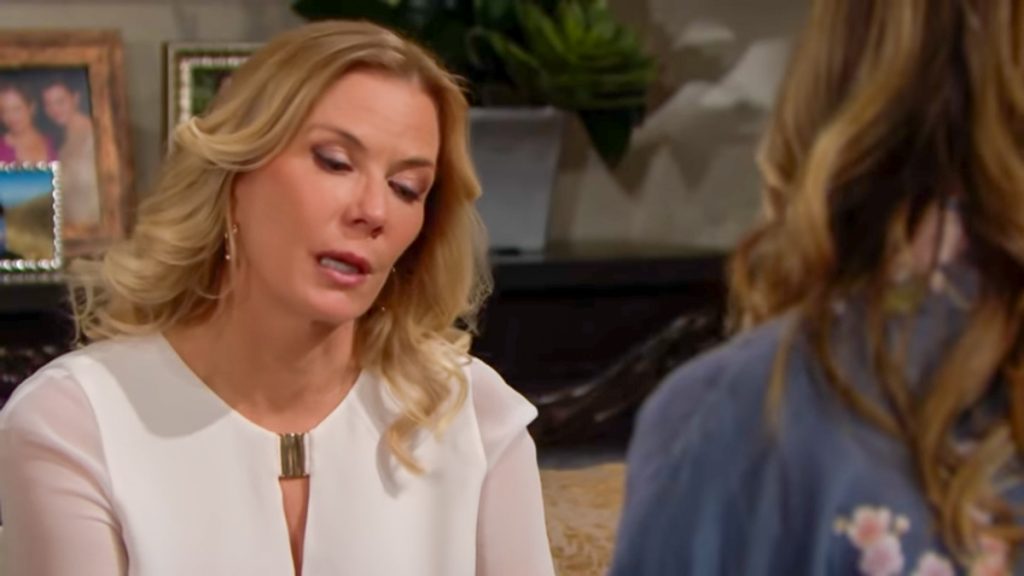 The Bold and the Beautiful spoilers for Monday, December 16, tease that Brooke Forrester (Katherine Kelly Lang) will be feeling heartbroken. As B&B viewers know, Brooke and Ridge Forrester (Thorsten Kaye) recently signed divorce papers after failing to come to terms on the issue of Thomas Forrester (Matthew Atkinson). Ridge refused to turn his back on Thomas and admit that Thomas was sick and needed help, as Brooke wanted.

According to B&B spoilers, Brooke will still cling to hope that Ridge will finally see that Thomas hasn’t changed, as she considers this the only way to save their marriage at this point. But that seems unlikely, given that Ridge simply won’t abandon his son or admit that he is beyond redemption.

Meanwhile, on Monday’s new episode of B&B, Liam Spencer (Scott Clifton) and Steffy Forrester (Jacqueline MacInnes Wood) will encounter a familiar face. As B&B viewers know, Liam has just asked Steffy to help him in finding out what Thomas is up to when it comes to Hope Logan (Annika Noelle). Liam fears that Thomas is still after Hope and that he’s dead set on manipulating her once again.

Well, it seems that Steffy will agree to work with Liam, since she wants to uncover the truth about what her brother is up to. And the first place they’ll start their search is with Thomas’ buddy Vinny Walker (Joe LoCicero). B&B viewers will remember that Vinny has been Thomas’ confidante and accomplice throughout his plot to get Hope for himself.

Vinny has listened to a lot of Thomas’ rantings about Hope, Liam, and the Logans. He certainly has a good deal of information that he could spill. Vinny is also the person who supplied Thomas the drugs that he used on Liam – the drugs that caused Liam and Steffy to end up sleeping together. Thomas also had planned to use the drugs on Hope as well, although that plan never came to fruition.

At any rate, Vinny knows a lot, but it seems that the person that Steffy and Liam will encounter in their search for him will be Zoe Buckingham (Kiara Barnes). It looks like Steffy and Liam will manage to find Vinny’s apartment, where Zoe is currently staying. B&B viewers will remember that Thomas has Zoe living at Vinny’s and basically waiting there for him to get back in at Forrester so he can rehire her there.

Well, Zoe has been getting impatient, and she recently called Thomas wondering where he had been and how long she was going to have to wait in the apartment. And it seems that when Steffy and Liam find her, she’ll be more than willing to spill the tea about what Thomas has been up to, and what his plans for the future are.

Zoe knows firsthand how obsessed Thomas still is with Hope. As B&B viewers know, Zoe tried to make a move on Thomas a while back, but Thomas didn’t accept her advances because he feels so strongly for Hope. That, plus the fact that Thomas has been ignoring Zoe lately, will apparently lead Zoe to tell Steffy and Liam all about Thomas’ current state of mind.

Days of Our Lives Spoilers: JJ Comes Clean to His Parents About His Anger With Kristen – Jennifer Left Shocked