Days of Our Lives spoilers tease that an explosive secret will be revealed at John Black (Drake Hogestyn) and Marlena Evans’ (Deidre Hall) anniversary party!

Will That Explosive Secret Be Explosive In More Ways Than One?

Will Kristen DiMera Crash The Party?

Days of Our Lives viewers wonder just how Kristen will be unmasked or if she will be unmasked before the party; we know Kristen will pull a gun on Marlena, and it could be at the party. Brady Black (Eric Martsolf) is John’s son, and he may bring Nicole Walker (Adrienne Zucker) to the party as his date, and as Days of Our Lives viewers know, she is really Kristen in a Nicole mask and wig! Other Days of Our Lives spoilers tease that John will be the one who ultimately unmasks Kristen, and if he just manages to pull it off her face, that would certainly cause her to reach for her gun! 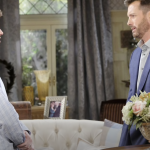 Other General Hospital spoilers tease that Susan Banks (Stacy Haiduk), the real Susan Banks, will also show up at the big anniversary party and since the last time she was in town, she figured out that Kristen was alive and impersonating her, even though Kristen thought she’d convinced Susan that she was her other sister, Mary Moira, Susan may have heard from the real Mary Moira since returning home!

That could be another reason that she shows up at the party unexpectedly, to warn John and Marlena that Kristen is alive! If she warns them in front of fakeNicole then fakeNicole might open her purse and Kristen’s gun comes out as well as fakeNicole opening her mouth and Kristen coming out! That could put Susan in danger as well as everyone else at the anniversary party!

Days Of Our Lives Spoilers: Desperate Kristen Points Gun At Marlena – Will The Good Doc Get Shot? https://t.co/hjG3CsXCFa

Kristen DiMera Will Be Exposed

The walls are definitely closing in on Kristen DiMera, and it’s only matter of time until she’s trapped; all signs point to that reveal happening before the end of this month, with Eli getting the news of Kristen’s survival, Brady becoming suspicious as to why he can’t get Kristen out of her mind after getting back in bed with who he thinks is Nicole, a suspicious Susan showing up, and Tony DiMera (Thaao Penghlis) or Xander Kiriakis (Paul Telfer) might even flip on her and tell all they know!