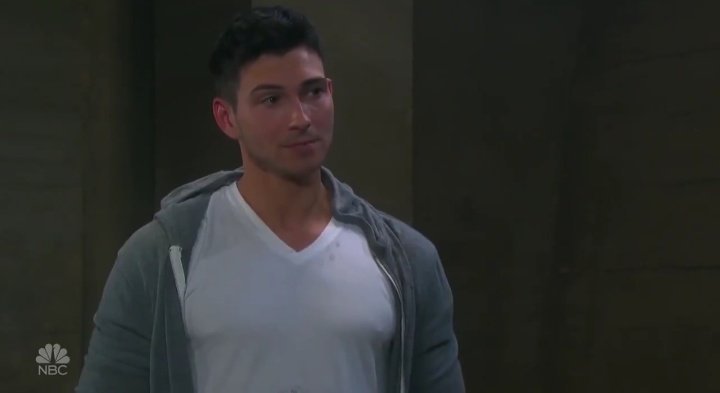 Days of Our Lives (DOOL) spoilers tease of another day of exciting drama and tense confrontations among the Salemites in Tuesday, September 17.

As Days of Our Lives viewers will recall, last week Victor demanded that Xander Kiriakis (Paul Telfer) bring Ben to the Kiriakis mansion and kill him! Xander did knock him out and bring him to Victor, and viewers saw Ben bound, gagged and tied to a chair.

When Xander refused to finish Ben off, Victor started strangling him with a necktie! Luckily for Ben, Brady Black (Eric Martsolf) walked in just in time to stop the murder! Maggie should have a few choice words of the sort she usually doesn’t choose to use for Victor in Tuesday’s episode!

Rafe Hernandez (Galen Gering) has been caring for baby David Ridgeway (Jaxton and Dexter Ellis) for several months now, since his mother was committed to the Bayview Mental Health facility several months ago.

She had asked him to travel to California, where she had left baby David with a friend, back to Salem and care for him, which he has, as if David were his very own. Now Jordan Ridgeway (Chrishell Hartley) is due to be released and he is waiting for news as to if he will be allowed to continue to be in the child’s life and hopefully care for him as he very much wants to do.

Days of Our Lives Spoilers – Jordan Ridgeway Returns To Salem

There is a catch in Jordan’s release from Bayview; someone will have to be legally responsible for her, and Rafe steps up to the plate since he already has her baby and has been caring for him. Rafe figures the best for all concerned is to have Jordan move in with him and David, so they can live as a family unit – mommy and daddy for David – plus it puts Jordan into the unofficial protective custody of Rafe, a former FBI agent and currently a Salem Police Detective. That way he can watch for any indications that Jordan is not as ready to have been released as the psychiatrists thought!

DOOL Spoilers – Gabi Hernandez DiMera Gets Into It With Julie Williams

Gabi Hernandez DiMera (Camila Banus) is probably lucky that big brother Rafe is busy with Jordan and David and not at Salem University Hospital to witness her get into it with the seriously ill Julie Williams (Susan Seaforth Hayes)!

Days of Our Lives viewers will recall in recent episodes when Julie had a major heart attack in the park adjoining Horton Town Square and Gabi thought Julie was faking and ignored her and walked off. Even though Gabi has brought flowers and is probably there to apologize to Julie, Julie will likely start something and Gabi won’t just stand there and not fight back! This, of course, could damage Julie’s already extremely damaged heart even more!

Days Of Our Lives Spoilers: Jennifer’s Kidnapper Revealed — Is It Eve Or Dr. Shah?