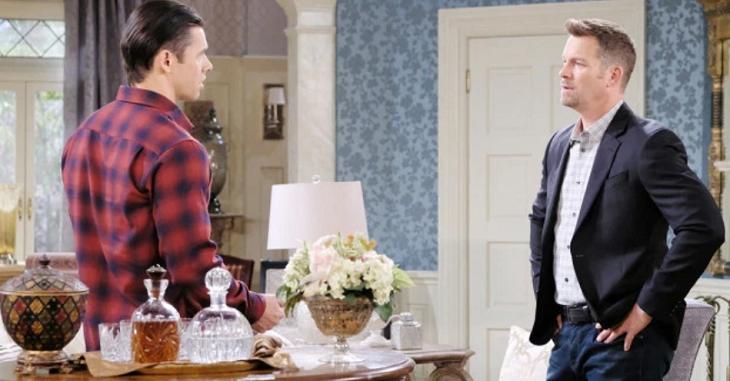 Days of Our Lives spoilers tease that Brady Black (Eric Martsolf) will try to fire Xander Cook Kiriakis (Paul Telfer) from his position at Titan the July 17 episode.

For one thing, as Days of Our Lives viewers know, Brady doesn’t trust Xander as far as he could throw him. He is starting to regret that he hired the black sheep shirttail relative of Victor Kiriakis (John Aniston) for an executive position at the company to begin with.

Xander has been nothing but trouble since he arrived back in Salem several months ago. As Days of Our Lives viewers should recall, the only reason Brady did hire him was as a result of bargaining with him to divorce Nicole Walker (Arianne Zucker) and hand over to him a recording that Xander had been keeping as leverage over her.

Brady keeps his eyes and ears open as Chief Executive Officer, or CEO of Titan Industries. He knows  Xander has a less than stellar history. It goes back many years, and he has been involved in many criminal activities. Brady may be privy to the criminal activity, of being caught by Rex Brady (Kyle Lowder) at Salem University Hospital not long ago, with Holly Jonas’ (Scarlett and Harlow Mallory) autopsy file.

He also recalls hearing that Xander was seen coming out of “Nicole’s” room at the Salem Inn. He knows they were seen looking rather cozy with each other. Also, Maggie Kiriakis (Suzanne Rogers) told him she saw Kristen DiMera (Stacy Haiduk) in a red dress at “Nicole’s” door.

Now that he has been told by Gabi Hernandez (Camila Banus) that she thinks “Nicole” is behind Kate Roberts DiMera’s (Lauren Koslow) kidnapping and that of Ted Laurent, (Gilles Marini), Brady is probably putting everything together in his mind. Maybe he has figured out Xander is in cahoots with “Nicole” and up to no good! Besides, Xander was arrested again, although it looks like he will skate out of the allegations.

General Hospital Spoilers – Xander Cook Had Chance To Prove Himself

Longtime Days of Our Lives viewers will recall that years ago Victor gave Xander, his wayward nephew, a chance to prove himself by giving him a job in the family business. But Xander didn’t do anything but mess up and get involved in crime even then. Of course, in real time “years ago” was only 2015. But in Days of Our Lives time, one day can last up to two weeks.

Victor became disappointed in Xander and distrustful of him. He did feel felt somewhat sorry for him and gave him some menial jobs. But Xander felt offended by. Brady, however, is not a blood relative, and he has the power to hire and fire without consulting Victor.

Will Brady successfully fire Xander in Wednesday’s episode? Or will Xander manage to sweet talk him into keeping him in his position at Titan? Xander may even have leverage on Brady he could remind him of and try to make another deal with him!