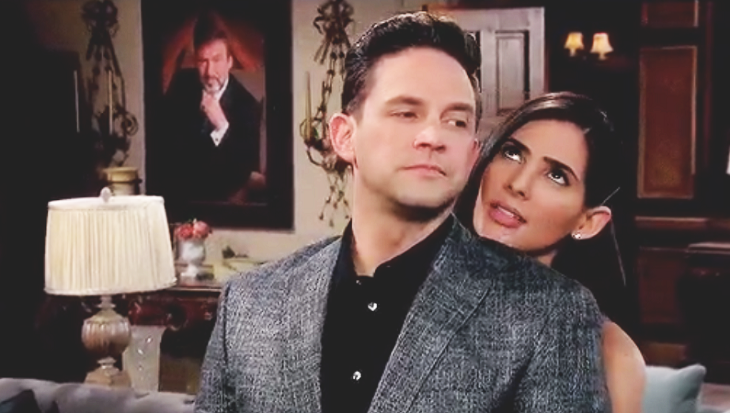 Days of Our Lives spoilers tease that Gabi Hernandez (Camila Banus) will find herself falling for Stefan DiMera (Brandon Barash) in spite of herself. She almost admitted it to Stefan on Friday’s episode outside Doug’s Place. This was after they were unceremoniously run out by Julie Williams (Susan Seaforth Hayes).

Stefan admitted he had feelings for and didn’t care who knew. But Gabi wasn’t quite ready to go there. She did admit to him that there “could be” something there however.

Gabi and Stefan’s physical relationship heated up pretty quickly, starting as “hate sex” and Gabi intending to seduce him, marry him, and take him down and take DiMera out from under him.

Underneath all that though has been a slow burning real love affair beginning between the two for several months. Stefan has realized and acknowledged it.

Soon Gabi will have to as well if she wants to be true to herself and what is taking place inside of her emotionally.

Undoubtedly, in Stefan’s case there could be a factor of rebound.  He had been attached to Chloe Lane (Nadia Bjorlin) after having previously been in love with Abigail Deveraux’s (Kate Mansi) alter, “Gabby”.

But Gabi hasn’t been involved with a man for a very long time. Her daughter with Will Horton (Chandler Massey), Arianna Horton (Harper and Sydnee Udell) was conceived and born in 2013. And even though she considers Will her first love, he came out as gay.

They do love each other, but it was never romantic for him even though they did sleep together and conceive Ari. Gabi was briefly married to a criminal named Nick Fallon (Blake Berris), who died in 2014.

Days Of Our Lives Spoilers: Maggie Horton Needs Help – Can Sarah Save Her? https://t.co/Tps3ZK7g0N pic.twitter.com/fKKprdrpJK

Before Will and Nick, she was briefly involved with Chad DiMera, (Casey Deidrick, Billy Flynn) Eli Grant (Lamon Archey) and JJ Deveraux (Casey Moss). But none of these relationships ever got very serious for her.

Perhaps once Gabi admits to herself that she’s falling for Stefan, things will work out for the two fledgling lovebirds!