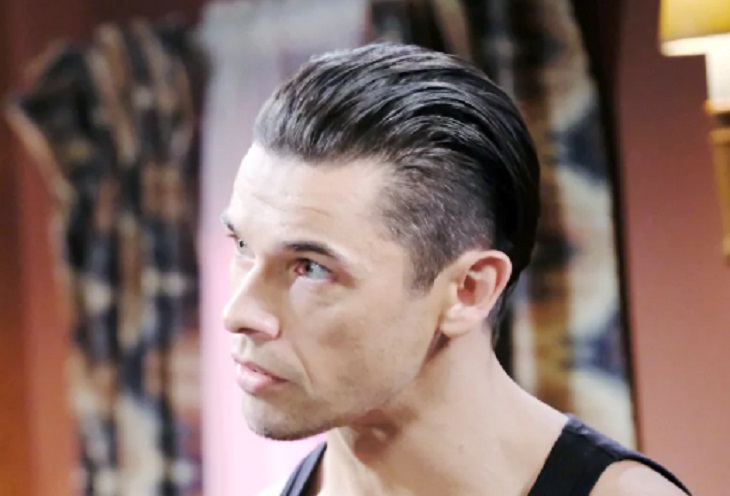 In Thursday’s episode, Days of Our Lives viewers will recall that Xander went over Eli Grant’s (Lamon Archey) head to talk to Police Commissioner Eve Deveraux (Kassie DePaiva) but that doesn’t mean Eli isn’t keeping an eye on him! Hope Brady (Kristian Alfonso) is also keeping an eye on him and follows him to the secret room, but he gives her the slip and takes off with Kristen DiMera (Stacy Haiduk)!

Days of Our Lives Spoilers – Hope Brady Is On The Case

However, Hope will check out the secret room, kick down the door, and find Ted Laurent (Gilles Marini) and Kate DiMera (Lauren Koslow) alive, and well enough to be found in a compromising position!

However, the two may just be hugging each other out of relief that Ted’s necklace breadcrumb did lead Hope to them, resulting in their rescue! Obviously Kate’s 911 call about hearing Xander say he killed Ted won’t get him arrested, because Ted is alive. However, in Monday’s episode, he will find himself in cuffs!

This could be related to Kristen’s temper tantrum in Thursday’s episode when she screamed, tossed her room in the Salem Inn, and headed over to the DiMera mansion, gun in hand, as Kristen!

Of course, this left a bewildered Abe Carver (James Reynolds) to wonder what happened when he went to talk to her after Stefan DiMera (Brandon Barash) sent him over after he fired her and she’d left the door open! In the midst of her tantrum, she was tired of all the incompetent people whose messes she had to clean up, including Xander’s, and she screeched that she was going to kill them all! This was after she earlier threatened Xander with a knife to his throat!

Near the end of Friday’s episode, Kristen told Xander, after expressing her strong displeasure at him not obeying her orders, that she was not going to let him ruin her mood and assured him that she would have the last laugh! It sounds like Kristen is going to flip on Xander and possibly send the police after him; although according to other Days of Our Lives spoilers, once again, he’ll wiggle out of those handcuffs!

Young and the Restless Spoilers: Should Y&R Reunite Sharon and Adam – Shadam Again?

The Bold and the Beautiful Spoilers: Will Hope Really Marry Thomas?