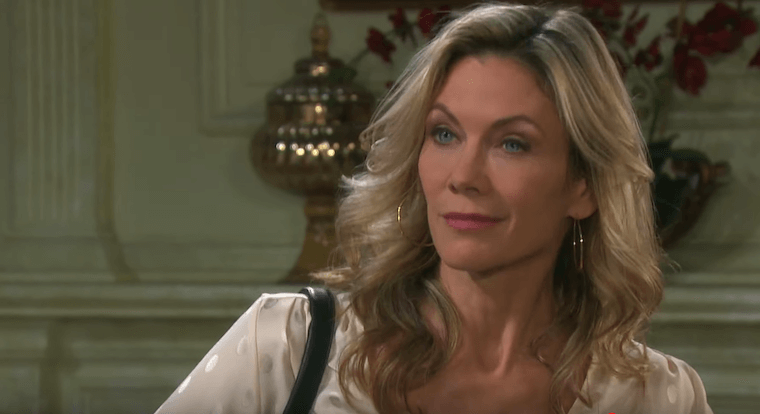 Days of Our Lives spoilers tease that Brady Black (Eric Martsolf) will do right by Kristen DiMera (Stacy Haiduk) and move her into the Kiriakis mansion – not necessarily marry her just yet, but he will move her in!

As Days of Our Lives viewers know, Kristen is pregnant with Brady’s baby. She hasn’t slept with anyone else but Brady (at least not that we know of!) and has not been artificially inseminated and did not go through with her plans to have Sarah Horton’s (Linsey Godfrey) embryo, which she originally was going to abort but changed her mind, into herself when Dr.Wilhelm Rolf (William Utay) told her he couldn’t because she was already pregnant!

Brady won’t want her living in a hotel room when she’s pregnant, and he will move her into the Kiriakis mansion so that if something does go wrong there are people there who can call 911. Victor and Maggie Kiriakis (John Aniston, Suzanne Rogers) live there, Will Horton (Chandler Massey) and Sonny Kiriakis (Freddie Smith) live there, Brady of course lives there, Xander Kiriakis (Paul Telfer) lives there and so does Sarah, who is a doctor. Sarah and Kristen, both pregnant at the same time and about the same pregnancy stage, living in the same house should prove interesting; Victor might decide to take a long vacation with all those hormones going off under one roof!

DOOL Spoilers – Victor Kiriakis May Have Needed Some Convincing

Brady may have needed to convince Victor to let him move Kristen in, especially since she is a DiMera and DiMeras and Kiriakises don’t get along! That rivalry goes back many, many years! But, not that long ago a DiMera was actually employed by Titan Industries, Victor’s company – Chad DiMera (Billy Flynn), and more recently a DiMera by marriage, Kate DiMera (Lauren Koslow).

Victor and Stefano DiMera (Joseph Mascolo) were actually both married to not only Kate, but to Vivian Alamain (Robin Strasser), so the romantic rivalry may have inspired the business rivalry! But, somehow Victor will be convinced and Brady will get Kristen moved in; although Brady may well have some ulterior motives driving his generosity!

Brady may have some ulterior motives in moving Kristen into the Kiriakis mansion; he may want her living there so that he can keep an eye on her and track who she contacts and who she may go out to meet with or who meets with her there in the mansion (Xander for instance)! Her living there will make it easy for Brady to spy on her and possibly have a tracker on her phone and maybe a recorder.

Even if she has provided abundant proof that she is pregnant, and with his baby, he may still not be ready to automatically believe everything she says, he will want to make sure she has really changed before making any more permanent arrangements!