Days of Our Lives Spoilers & Recap Monday, May 6 : Rafe Informs Hope Of The Accident – Gabi And Stefan Are Almost Busted 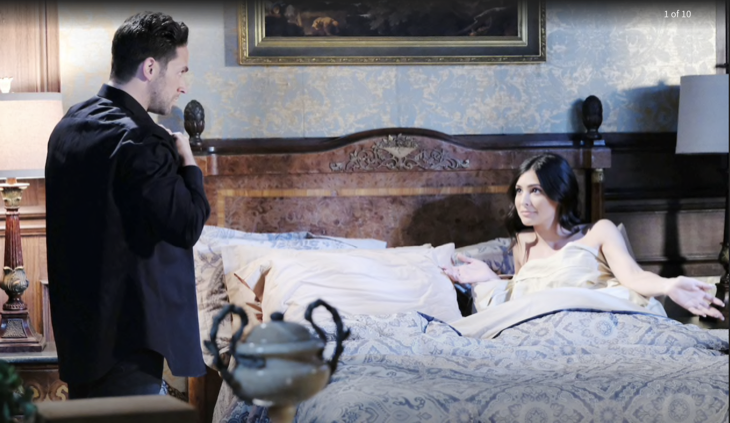 Days of Our Lives Stefan Dimera (Brandon Barash) and Gabi Hernandez (Camila Banus) are rushing to get dress after sex. Chloe Lane (Nadia Bjorlin) is downstairs talking to Brady Black (Eric Martsolf). Chloe blames herself for Holly Jonas’ (Harlow and Scarlett Mallory) disappearance. Chloe tells Brady that Rafe Hernandez (Galen Gering) doesn’t trust Hector (Oswaldo DeLeon) or Ted Laurant (Gilles Marini). Chloe excuses herself to speak to Stefan, Brady says he will be there if she needs anything.

Hope Hernandez (Kristian Alfonso) calls Chloe and Brady starts to leave but sees Stefan and Gabi coming downstairs and questions what is going on here. Hope tells Chloe the plan, Chloe questions Hope’s concern. Brady starts in on Stefan, Gabi sends Stefan to speak to Chloe, she will handle Brady. Chloe questions whether she can trust Ted or not. Stefan keeps looking at the door; he claims he heard voices before, Stefan goes into the hallway and asks Gabi what she told Brady.

Days of Our Lives Brady starts to tell Chloe about Gabi and Stefan’s tryst, Gabi stops him. Gabi tells Brady she and Stefan didn’t sleep together. Gabi says she threw herself at him and he turned her down. Gabi begs Brady to leave it alone. Gabi says she lied to Brady. Gabi claims to be protecting Chloe by lying to Brady.

Days Of Our Lives Spoilers Tuesday, May 7: Holly ‘Dies’ in Van Explosion, Nicole Has a Meltdown – John and Marlena’s Celebration

Days of Our Lives Ted says he knows where Holly is, Rafe wants to know how close Ted is to Hector and accuses him of being on the cartel payroll. Rafe wants someone to go in to get Holly. Hope gives Ted the ok to set up a meeting with the kidnapper. Ted and Hope agree that they don’t want to rock the boat. Hope wants to send an unmarked officer, Ted refuses. Hope is counting on Ted to bring Holly back safely, Rafe follows him when he leaves.

Days of Our Lives Eric Brady (Greg Vaughan) and Nicole Walker (Arianne Zucker) are at the Kiriakis mansion, Victor Kiriakis (John Aniston) walks in and starts berating Nicole. Victor blames Nicole for Holly’s kidnapping. Victor says Nicole fell victim to Kristen and Xander Cook (Paul Telfer) and turning Holly over to Chloe is what got her kidnapped. Nicole tells Victor that Brady is the one who made her leave, Xander forced her to stay away. Victor asks if the authorities are aware that she committed murder.

Victor tells Nicole what goes around comes around. Sarah Horton (Linsey Godfrey) walks in and threatens to involve Maggie Kiriakis (Suzanne Rogers) if Victor doesn’t back off. Nicole thanks Sarah for taking up for her. Nicole starts to blame herself. Sarah talks her down. Rex Brady (Kyle Lowder) confronts Eric about Sarah’s suspicions and tells him to back off. Nicole calls Hope who tells her to come to the station immediately. Nicole gets to the police station; Hope thinks they will hear something soon. Rafe calls Hope and tells her there was a terrible accident.

May 6 DOOL Recap Sarah Horton Lies To Protect Her Secret

Days of Our Lives Rex interrupts Marlena Evans (Deidre Hall) and Sarah conversation. Rex wants to talk to Eric about being upset over her tryst with Xander. Sarah tells Rex he doesn’t have to say anything to Eric. Marlena says Sarah and Eric need to work this out for themselves.

Sarah tells Rex to back off and let her handle this himself. Marlena asks Sarah what happens if Rex goes to Eric, she says he won’t. Brady arrives at the hospital and gives Marlena an update on Holly. Rex is proud of Sarah for standing up for Nicole. Sarah doesn’t like Victor and Rex says Maggie feels the same about him. Sarah wants to move up the wedding.

Days of Our Lives (DOOL) recap for Monday, May 6, 2019, reveals Ted arrives at Xander’s room; he has left with Holly.

Rafe walks in, and Ted is furious that he followed him. Ted gets a call from Hector’s associate. Ted claims that the kidnapper called and knows he is there. Rafe rushes off after hearing a child cry, and a car starts up and leave. Ted calls Rafe an idiot.