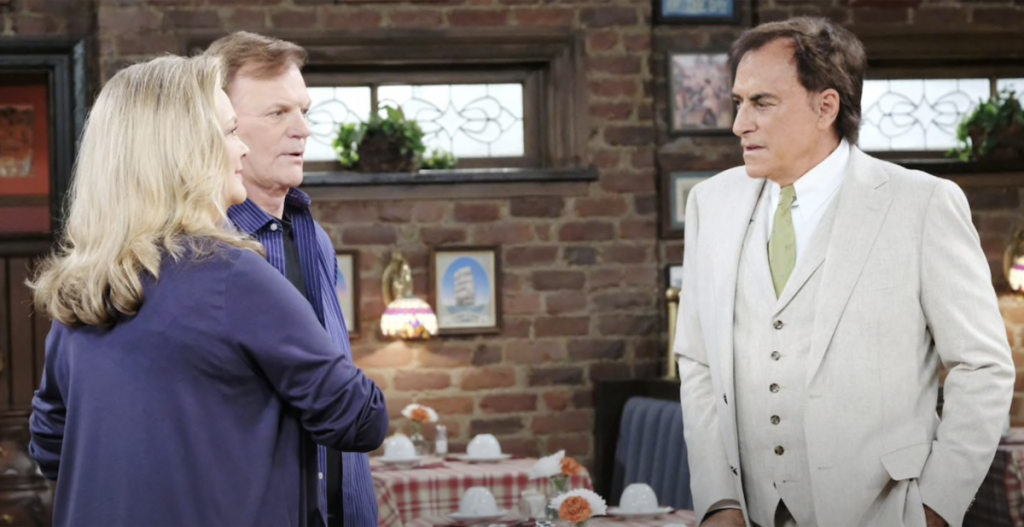 Days of Our Lives Spoilers – The Power Struggle For DiMera

The power struggle for DiMera Enterprises will continue, as Gabi Hernandez DiMera (Camila Banus) becomes involved in a major showdown with the other “Mrs. DiMera”, Nicole Walker DiMera (Adrienne Zucker).

The Days of Our Lives weekly promo shows Gabi and fake Nicole in a very physical fight, with Gabi trying to pull at her face; Days of Our Lives viewers have to wonder if Gabi will be the one to unmask Kristen DiMera (Stacy Haiduk)!

Other Days of Our Lives spoilers tease that Stefan DiMera (Brandon Barash) will intervene, and save Gabi’s life; however, photo stills from this week’s program also show Kristen trying to hide an unconscious Gabi and Stefan, pulling their bodies by their legs! However, these photo stills show Kristen as Kristen, not as Nicole!

The search for Kate DiMera’s (Lauren Koslow) will also continue, since it is closely related to the Ted Laurent murder case. Ben and Ciara Brady (Victoria Konefal) will team up to look for evidence against FakeNicole and become trapped in her hotel suite hidden under the bed while doing so, while Ted and Hope put the squeeze on Xander Kiriakis (Paul Telfer) for information related to the kidnappings and the murder. Xander will make a deal with John and Hope. Friday, Days of Our Lives spoilers say that Kristen will finally be exposed!

Tony DiMera (Thaao Penghlis) will find himself having to explain things to Anna DiMera (Leann Huntley), who goes ballistic at him over finding out he’s been alive for a while without trying to contact her to let her know, and that he’s married to fakeNicole Walker!

Anna will go to extremes to test Tony’s professed love for her, although part of her plans will smack of a little “lighthearted revenge.” She will make an announcement that she and Roman Brady (Josh Taylor) are engaged, before informing Roman of it, who will reluctantly go along with the ruse once she explains why she’s doing it. Her end game is to win Tony back but she wants to make sure he really loves her before she takes him back!

Haley Chen (Thia Megia) has a terrible accident, tripping and falling down the spiral staircase at the loft that she, Tripp Dalton (Lucas Adams) and JJ Deveraux (Casey Moss) share, and she is rushed to Salem University Hospital. A budding romantic triangle may be starting between the three roommates, as Tripp will confess to Dr. Kayla Johnson (Mary Beth Evans) that he’s realized he has romantic feelings for Haley, which this terrible accident may have brought to the surface. Photo stills show JJ feeling Haley’s head, although it doesn’t seem to be directly after the accident; however he may be checking for any outward swelling – or, he may just be playing with her head – uh, hair!

Days of Our Lives Spoilers – Jack Deveraux Versus Jennifer Horton

The whole mess Jack Deveraux (Matthew Ashford) got himself into with Eve Donovan Deveraux (Kassie DePaiva) will also continue to play out this week, as the two face off in court. Eve will plead with Justin Kiriakis (Wally Kurth) to represent her against Jack, but he may tell her he’d rather gargle glass, as he did when he turned Jack down for the District Attorney job! Jack isn’t real happy with Jennifer Horton (Melissa Reeves) and Adrienne Kiriakis (Judi Evans-Luciano) this week either, over an article that was written about him!