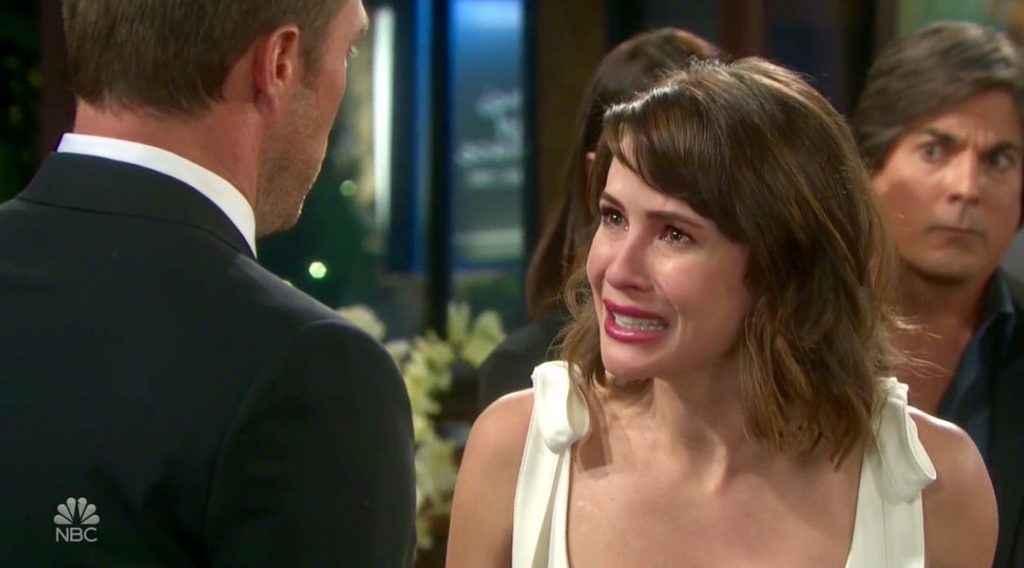 Days of Our Lives rumors tease that either Sarah Horton Brady (Linsey Godfrey) will dump Eric Brady (Greg Vaughan) for good or he will dump her for good once he runs off to Chicago to look for the real Nicole Walker (Adrienne Zucker)!

Even though other Days of Our Lives spoilers tease that Jack Deveraux, (Matthew Ashford) Jennifer Horton (Melissa Reeves) and Eric will take off for Chicago after finding out Nicole and also her daughter Holly Jonas (Scarlett and Harlow Mallory) are alive, finding out from Xander Kiriakis (Paul Telfer) about Holly, when he swears to Maggie Kiriakis, (Suzanne Rogers) and Eric and Sarah together that Holly’s alive, other spoilers for the week indicate that Eric’s main focus seems to be on Nicole alone, not Nicole and Holly! Jack and Jennifer may be going in hopes of finding Dr. Wilhelm Rolf (William Utay) alive and a new “resurrection warehouse” in Chicago so they can get more amnesia serum, but it appears that Eric, Jack and Jennifer may go together but nothing about Sarah going along.

Other spoilers indicate Eric having to talk to Sarah about Nicole and the state of their relationship, and he will confront Kristen DiMera (Stacy Haiduk) after finding out she has been masquerading as Nicole, and may decide that is why he didn’t feel anything for her after going to visit her in a recent DOOL episode before she was unmasked, and telling Sarah he knew he was over Nicole!

It seems that Eric is not as over Nicole as he previously thought, because he will have to break news about Nicole to Sarah. He may have gotten out of Kristen that the real Nicole is still alive, and his feelings for her may have come flooding back as result! However, Xander and Sarah will have a contentious conversation about Eric and Nicole as well, and Xander, being in love with Sarah might put ideas in her head to make her break up with Eric over his still having feelings for Nicole after all!

After all that, Eric and Sarah have an honest conversation about their relationship right before he takes off with Jack and Jennifer to Chicago to look for Nicole! If he had the focus on both Nicole and Holly as a rescue, of course wanting mother and daughter together, then Sarah may have gone to help. She was very attached to Holly!

Days of Our Lives Spoilers – Will Sarah Brady Dump Eric Brady For Good, Or Will He Dump Her First?

Honestly, this could go either way; Eric may dump Sarah because his feelings for Nicole came flooding back when he realized Kristen was impersonating her and that she is still alive somewhere; or Sarah might dump him first after Xander convinces her Eric is still in love with Nicole and cite some things to prove it! If Eric is much more focused on Nicole herself rather than both Nicole and Holly, that will certainly tell the true tale and Sarah will know his heart is not truly for her!

SOURCE: Days of Our Lives Rumors and Storyline Predictions