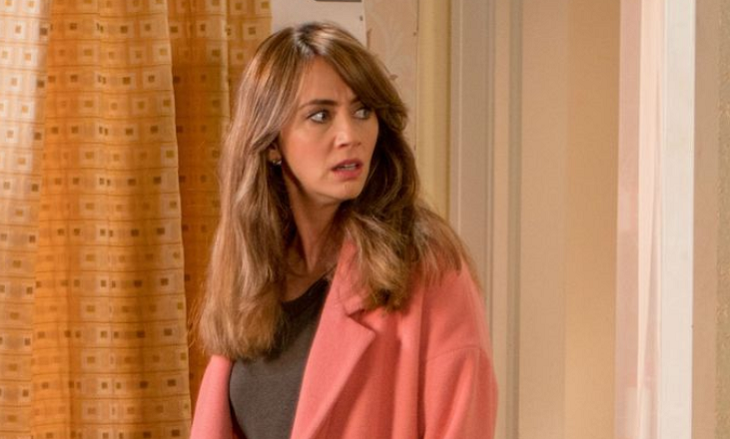 Coronation Street spoilers have indicated that there might be a new storm brewing for Maria Connor (Samia Longchambon) in a new storyline after she has a heart to heart conversation with Michelle Connor (Kym Marsh). Here’s what you need to know.

It all begins with Maria confiding in Michelle Connor about something that has not yet been revealed. The two women look pretty worried about something, as Maria looks like she is sharing her woes with her former sister-in-law.

Michelle looks sympathetic in return, as she does her best to try to ease Maria’s concern. The caption for the teaser photos reads: “We’ve had a week of glorious sunshine – but are there stormy times ahead on the Street?”

As many Coronation Street fans know, Maria and Michelle don’t often appear in scenes together, despite their close family link. Maria was married to Michelle’s brother Liam, who was killed in a car crash back in 2008. They also had a son together named Liam, who is now 10-years-old.

Of course, a lot of fans can’t help but wonder what is going on, but a lot of people have speculated online that it might have something to do with actress Kym Marsh.

She has decided to leave the soap after 13 years in her role as Michelle Connor. And while Kym is looking to leave the show, she says that it’s not a permanent decision, but rather only a brief departure.

With that said, it doesn’t look like Michelle’s exit plot will play out until much later this year. However, Michelle isn’t the only character that is leaving Weatherfield.

TONIGHT AT 7.30 & 8.30PM. Toyah confides in Leanne how difficult it has been living with Imran since Rana’s death. She’s then horrified to realise he overheard every word!

How will he react?

While there’s no doubt that fans are going to miss some of their favorites, it will be interesting to see how all of the drama will play out in the coming weeks. Of course, fans will have to tune in to find out!

General Hospital News: Sam And Sonny Get Chummy – Could SamSon Ever Be A Thing?