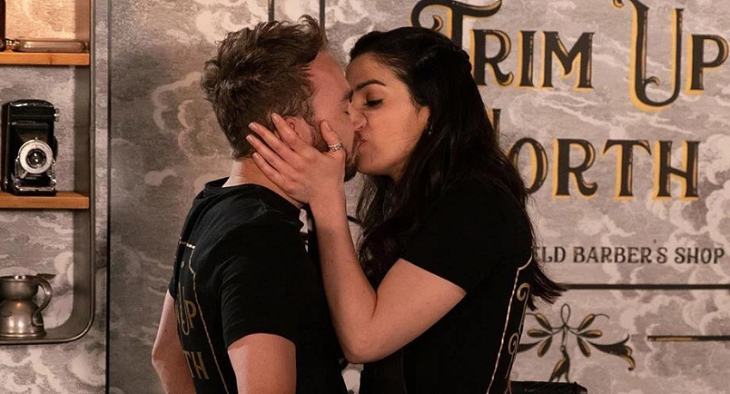 Coronation Street spoilers indicate that Shona Ramsey (Julia Goulding) is going to have a lot of work ahead of her if she expects to keep David Platt (Jack P. Shepard) by her side. That’s because newcomer Natalie Watkins (Leigh Anne Carter) has her eye on the prize! Here’s what you need to know.

Apparently, David and Natalie are going to share a kiss that will shock viewers. Now, David is not getting up close and personal because he wants to leave Shona.

Instead, he’s doing it because he knows that if Natalie doesn’t get things her way, there’s a good chance she might go to the authorities about his and Nick Tilsley’s (Ben Price) little theft secret.

In order to keep her quiet, David is willing to play her little game. However, this is going to cause a hug problem for he and his partner, Shona.

One Corrie insider puts it this way: “This isn’t an everyday occurrence for David, and he doesn’t dislike being seen as a sex symbol. Of course, his heart belongs to Shona, and she has nothing to dear, but that doesn’t stop her from being jealous.

“The problem is that David can’t be rude to Natalie because, of course, he and Nick need to keep her sweet.”

One of the reasons why Shona is jealous is because she sees a lot of herself in Natalie. At least, her old self. She used to be the same kind of spunky “street urchin” that Natalie is and that might be why David is so attracted to her.

At the same time, David knows that he can’t be rude to Natalie. He and Nick must keep things sweet with Natalie in order for her to keep quiet about their little secret. The moment that comes out of the bag, they know that their future will be in jeopardy.

Natalie knows this and that’s why she’s playing with everyone’s emotions. Of course, fans will have to tune in to find out what will happen next!