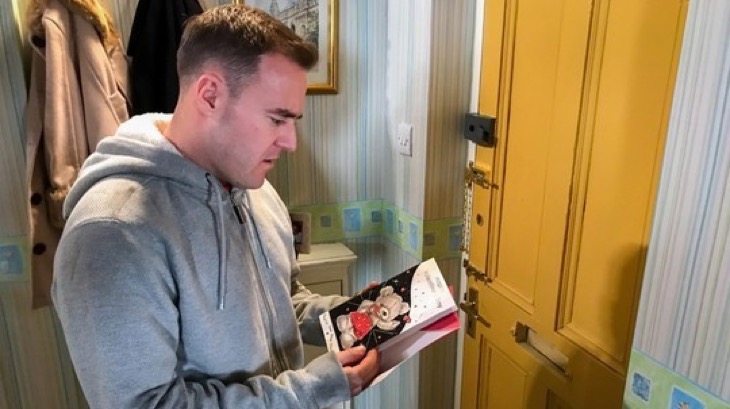 Tyrone Dobbs (Alan Halsall) has many things on his plate right now, and it would seem that he’ll be facing another problem from the person who’s been of great to him lately, Mary Taylor. (Patti Clare) Tyrone suspects that Mary might have feelings for him after getting a mystery Valentine’s card with handwriting that’s similar to Mary’s, “Coronation Street” spoilers reveal.

Mary has been spending a lot of time at the Dobb’s house to babysit Ruby Dobbs. (Macy Alabi) The help, which Mary offers for free, gives Tyrone a break from work and parenthood that is taking up most of his time and energy. Tyrone is juggling everything by himself while his partner Fiz Brown (Jennie McAlpine) moves away from Weatherfield to Birmingham so Hope can get the professional help that she needs.

Viewers might recall that Hope Stape (Isabella Flanagan) has been exhibiting behavioral problems. Cerberus goes missing because of her and she bites Ruby. Hope’s actions forced Fiz to enroll her in a special school in Birmingham and maybe start a new life there.

As the Kabin comes under new ownership, we thought it would be fun to have a look back to June 1973, as Rita interviews a hiccuping Mavis for the assistant job! #ThrowbackThursday #TBT #ClassicCorrie #Corrie pic.twitter.com/kEPtuS78m5

Tyrone who’s been dealing with all the responsibilities alone while Fiz is away found relief in Mary. She was like heaven sent when she agreed to look after Ruby and doesn’t even ask for payment. She explained that helping others and feel needed was enough. But she’s been doing a lot of unusual things for Tyrone, which gives him a hint that Mary might be developing feelings for him.

Kevin Webster (Michael Le Vell)  also thinks the same and warns Tyrone about it. The latter’s suspicions that Mary might have a secret crush on him became even stronger when he found a mystery card addressed to him. Wanting to know where it came from, Kevin and Tyrone work together to unveil the mystery sender.

To confirm their suspicions that it was from Mary, they ordered some flowers and asked Mary to write the card. After doing so, Tyrone was shocked to see that Mary’s handwriting was similar to the one on the card he received.

Is the card from Mary? Will Tyrone confront her? Viewers have to stay tuned to find out.