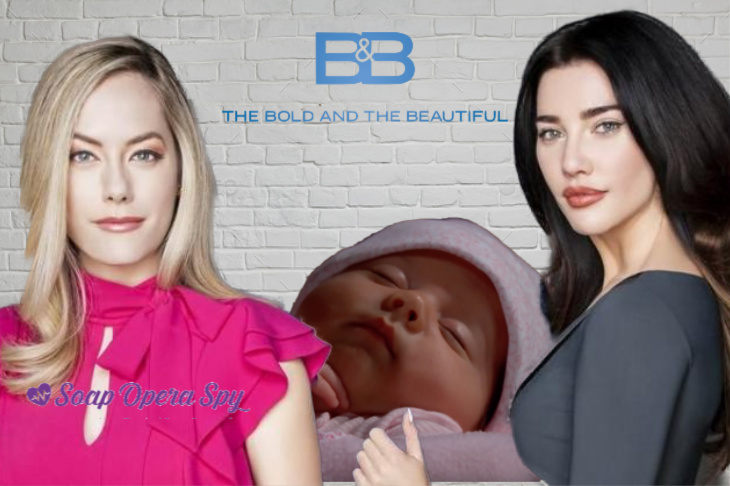 The Bold and the Beautiful rumors indicate that when the baby switch is revealed Steffy (Jacqueline MacInnes Wood) will fight for custody of Hope’s (Annika Noelle) baby.

The baby switch is the biggest storyline on B&B at the moment. Viewers are left feeling sympathy for both sides with Hope grieving the loss of her daughter; while Steffy is becoming attached to a baby she doesn’t know is Hope’s.

With so many people becoming involved, it’s only a matter of time before Reese’s (Wayne Brady) scheme is revealed.

Steffy has stated she wanted another child so Kelly (Zoe Pennington) could have a sibling to grow up with. When tension started brewing between her and Hope again, Steffy realized her dream of Kelly having a sibling to be close to wasn’t going to happen. That’s when she decided to adopt, which now leads to the baby swap storyline.

When the truth is finally exposed, Hope is going to be furious. She’ll feel like Steffy and Taylor (Hunter Tylo) did this on purpose, and she’ll make sure that both women are never near her daughter again.

But Hope shouldn’t expect Steffy to give up without a fight.

Steffy’s grown to love the child as her own and she wants to continue to be part of the baby’s life. If Hope fights her on this, Steffy will have no choice but to sue for custody.

Steffy and Hope’s battle for the baby is once again going to put Liam (Scott Clifton) in the middle. While he understands Hope’s angry, he can also see Steffy’s side and how hurt she’ll be over having to give up the baby.

No matter what happens, it seems like the battle over baby Beth isn’t going to be over once the baby switch is uncovered.

Kathleen Gati Talks Dr. Obrecht’s Surprising Longevity On GH and What’s Ahead for Her Character