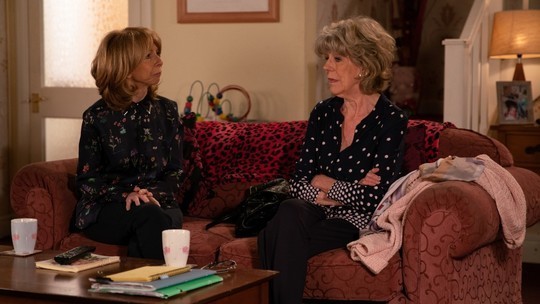 On “Coronation Street,” Audrey Roberts (Sue Nicholls) will finally learn the truth about what happened to her inheritance money. David Platt (Jack P. Shepherd) will drop the bombshell to his unsuspecting gran after Natalie Watkins (Cassie Bradley) gatecrashes their family holiday. Here’s what to expect on the upcoming episode, according to its portrayer, Sue Nicholls.

Nicholls said that after she started to accept that what she had with Lewis Archer (Nigel Havers) wasn’t real, as suggested by her daughter Gail Platt (Hellen Worth). Of course, this greatly benefits Nick Tilsley (Ben Price) and David. She feels let down and regrets falling in love with Lewis. She’s going to definitely feel differently about her former love once she finds out the truth.

It all starts when Natalie appears uninvited in their family holiday. Gail recognizes Natalie’s tattoo as the same one found on the mystery woman who withdrew money from Audrey’s account. This prompts David to tell Audrey everything, which infuriates Nick.

When asked if bringing the Platts together was a good idea or a recipe for disaster, Nicholls replied, “Well Audrey knows that the family has always been slightly dysfunctional, so despite what the viewers might think, it is actually fairly much the norm for the Platts – all the bickering and stuff is part and parcel of their everyday life. It is the usual thing that families do, they get together at Christmas or for family events and they believe it will be fun and it will bring them all together and calm them all down. That is how Audrey thought of it, that’s family life. The others are probably less optimistic than her.”

Someone's ready to confess… Who's excited for next week's #Corrie, every night at 9pm!?#TheTruthHurts – find out more: https://t.co/0MQ6W2RKrO pic.twitter.com/Gmq0HBMSWA

Nicholls added that her alter ego had no idea that it was Nick all along, which makes the story more powerful. “It is great because it puts a real edge on the whole holiday. Nick knows everything is closing in and he just has to put a brave face on it and get on with the holiday.”

She also said that guilt may have been the primary reason why David decides to come clean. When she finally wraps her head around what really happened, Audrey gets hurt not because her grandchildren stole her money. She feels distraught that they allowed her to think that it was Lewis’ fault. She knows they can repay the money, but they can never do anything about the name of her loved one, Lewis, whom they ruined.