Thomas Forrester (Matthew Atkinson) continues to exist in a dream world on ‘The Bold and the Beautiful’. Despite all that’s happened, he now believes that a reconciliation with his wife, Hope Forrester (Annika Noelle), is possible.

Meanwhile, back in the fictional reality of Los Angeles, California, Beth Spencer’s (Madeline Valdez and River Davidson) parents, Liam Spencer (Scott Clifton) and Hope are basking in the afterglow of this incredible reveal.

Bold and the Beautiful Spoilers – Justice Must Be Applied Equally

Ridge Forrester (Thorsten Kaye) is intent on two plot points. He wants everyone who was involved in pushing the Phoebe Forrester ruse punished. But Ridge also wants to keep making excuses for Thomas.

There’s no question in Ridge’s mind that Steffy Forrester (Jacqueline McInnes Wood) is hurting and needs help. But Thomas, well, he’s a good guy and surely did nothing wrong. 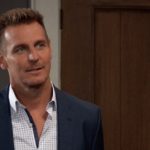 Maintaining blinders while Thomas was clearly exhibiting bizarre behavior patterns was something that Ridge and Steffy did. They didn’t want to believe that their loved one’s mental health issues were fueling what was happening. But now, in light of the evidence, justice must be applied equally.

Bold and the Beautiful Spoilers – Can’t Hang With Vinny Forever

The epic, real life rooftop scene was set. Liam and Thomas take their fight to the helipad, while Hope follows. After Atkinson’s beleaguered character was put into a headlock by Liam, Hope finally confirmed the truth. Beth was alive and Phoebe was Beth.

So, Thomas broke the hold and ran out of the frame. Viewers haven’t seen him since, which furthers what basically is a cascading reveal.

Some contents from the original pack, meaning one capsule, was put into Liam’s margarita at the cliff house. That led to the perceived ‘Steam’ reunion. It didn’t appear that Thomas used anything from the second bag Vincent handed him on the day of the ill-fated honeymoon.

Is your heart breaking for her? 💔💔https://t.co/QkYcVQpsS4

So, Thomas has reconnected with Vincent again. That’s where Hope’s missing husband and the baby steal enabler has been.

Since Thomas believes that everything can be explained away, he’s heading toward a second clash with Liam. The one and only love of Hope’s life is not about to let her faux husband and manipulator have any say without a fight.

Whether B&B wants Thomas to remain in the story will soon be known. It doesn’t seem like there’s an evidence to tie him to Emma Barber’s (Nia Sioux) car crash. As far as what he knew about Phoebe being Beth, that could be written away if that’s the desired the show wants to take with Atkinson’s dynamic alter ego.