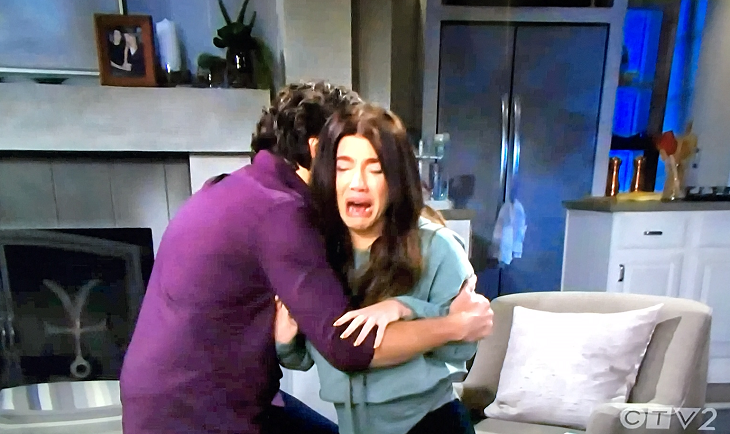 The Bold and the Beautiful recap for Monday, August 12 finds Brooke Logan (Katherine Kelly Lang) and Ridge Forrester (Thorsten Kaye) debating on what to do about their children.

It begins at the cliff house where Liam tells Hope that this is not going to be easy, especially for Steffy. Meanwhile, Steffy is crying as she’s having a hard time registering everything that is going on.

Ridge wants to take things one step at a time while Brooke argues that Hope deserves to have her baby back – end of story. Hope says that she plans on bringing her baby back home with her that night. Ridge and Brooke ague.

Steffy says that Beth will be confused as Steffy’s home is the only home she’s known so far. Ridge wants to delay everything while Liam admits that his heart is breaking for Steffy. Ridge says that he’s willing to hunt down Reese Buckingham (Wayne Brady) and wants him arrested.

Steffy admits that she wasn’t prepared for any of this and that she wants to fight it, but at the same time she understands that the baby belongs with her biological mother and father.

Bold And The Beautiful Spoilers – Wyatt Spencer Looking For Forgiveness

While Steffy is holding Beth, Liam can’t help but break into tears himself. Steffy then tells Beth that she needs to let her go. Liam, Hope, and Brooke leave. Steffy then falls to the floor, with Ridge trying to hold on to her.

At Forrester Creations, Wyatt Spencer (Darin Brooks) tells Sally Spectra (Courtney Hope) everything that had transpired between Hope and Liam. He starts off by saying that it’s a long story. Wyatt says that it was Liam who found out about the secret, leading to his investigation. In the end, it was Douglas who told the truth. Sally calls Thomas Forrester (Matthew Atkinson) a bastard for knowing about this all along. Talk then turns to Flo Fulton (Katrina Bowden), with Wyatt admitting that he had no idea she was such a two-faced person.

Wyatt then says that’s the reason why he came to Sally to apologize to her. He knows he was wrong. Wyatt also says that he wants to talk and that he has no expectations. Sally smirks when Wyatt says that he should have known better. She makes a comment about how she probably knows Wyatt better than he knows himself. She then says that if they are going to get back together, Wyatt has a huge debt to pay her. She likens it to boot camp. Wyatt laughs and gives her a hug.