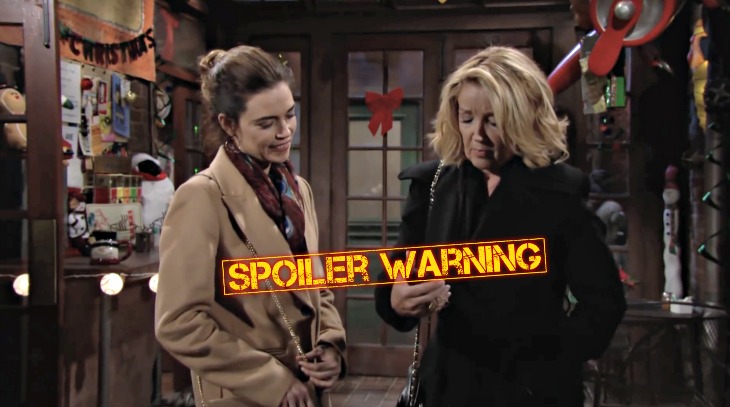 “Young and the Restless” spoilers for Tuesday, December 4, tease that Rey (Jordi Vilasuso) will deliver news and orders. In a car on the ranch property, Victoria (Amelia Heinle) and Nikki (Melody Thomas Scott) learn the horses are fine. They gaze at the fire in the distance, which Rey intends to investigate. He tells Nikki and Victoria to stay somewhere else while the cops look into this.

Over with Devon (Bryton James), he shuts down Ana’s (Loren Lott) attempt to talk and reveals that he won’t be coming home tonight. At Tessa (Cait Fairbanks) and Mariah’s (Camryn Grimes) apartment, they keep their distance as they read books in bed. Tessa makes an effort to chat, but Mariah eventually decides to go to sleep. As a result, Tessa throws in the towel for the night and switches the light off.

In the morning, Tessa wakes up and notices Mariah’s already gone for the day. Mariah heads off to see Kyle (Michael Mealor), who learns Tessa did something bad and Mariah’s struggling with trust issues. She frets about not being able to walk away when she keeps facing disappointment. Kyle doesn’t get a chance to say much thanks to Mariah’s venting, but she’s grateful anyway.

At Victoria’s place, Nikki worries when she can’t reach Victor (Eric Braeden). Her husband has suddenly disappeared. Nick (Joshua Morrow) shows up later with updates on the fire, which is finally out. Unfortunately, the stables were destroyed in the blaze. Nikki’s hoping this was an accident due to some defective wiring. She doesn’t even want to think about the other possibilities.

Later, Nikki sends Victor some emails and is alarmed when they bounce back. She tries calling Victor’s phone again, but a message states that his number is out of service. Nikki goes into panic mode as she wonders what’s going on. Rey drops by later and confirms that the fire was set intentionally. He wonders about Victor, but the Newmans stall on the issue.

After the detective dashes off, Nick has a feeling Rey knows more than he’s letting on. Victoria suggests she has more than a feeling! It’s clear that this investigation is going to bring major trouble. Over with Fen (Zach Tinker), he meets Lola (Sasha Calle) and does a little flirting. Lola doesn’t give him the reaction he’s looking for and he’s bummed to learn she has a boyfriend.

Fen joins Mariah and Kyle at the coffeehouse, where he hears about Summer’s (Hunter King) recent departure. After Fen brings up his desire for a music career, Mariah offers to listen to his demo and potentially have him on GC Buzz. Fen feels like his audience is more of the late-night TV crowd.

Once Lola arrives, Kyle takes his opportunity to flaunt their relationship and scores a kiss. Fen thinks Kyle will screw it up, but the determined Abbott is confident he won’t. They end up clashing a bit before Kyle and Lola leave together. Mariah’s on her way out the door when Tessa appears and hopes they can have coffee. She seeks a raincheck when Mariah bails for work instead.

At Devon’s penthouse, he finally makes it back with a terrible hangover. Nate (Brooks Darnell) makes some sort of concoction to help him out. Afterward, Ana encourages Devon to share his struggles. She tries to offer her perspective based on her own life experiences, but Devon doesn’t think they can be compared. He lost his wife and their baby, but it’s like he hasn’t fully absorbed the loss yet.

Ana contends that a professional might be able to help, so Devon gets on board. He plans to speak with a therapist soon. “The Young and the Restless” spoilers hint that Devon’s got a long road ahead as he tries to heal his broken heart. We’ll keep you posted as other Y&R details and rumors emerge. Stay tuned to see what’s ahead in Genoa City.